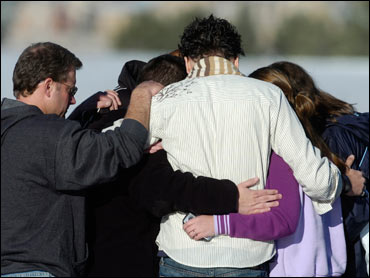 Federal authorities were alerted to anti-Christian Web site postings apparently written by Matthew Murray only hours after he opened fire on a missionary center and just before his deadly rampage at a Colorado megachurch, the Web site's administrator said.

Joe Istre, president of the Association of Former Pentecostals, which operates the site, told The Associated Press on Tuesday that he and other forum participants had grown familiar with the frequent and disturbingly dark poetry and obsessions of one participant, whose nickname was nghtmrchld26.

But when that same author, believed to be Murray, left at least 11 posts on the day of the twin shootings warning that he wanted to kill Christians, a forum participant immediately contacted the FBI, Istre said.

"I'm coming for EVERYONE soon and I WILL be armed to the %$ teeth and I WILL shoot to kill," one threat posted by nghtmrchld26 said.

Istre said he received a message from a board member who claimed to have contacted the FBI about a half-hour before the bloodshed at New Life Church in Colorado Springs.

"My reaction was disbelief, but then almost horror," Istre said of Murray's violence. "This guy was posting on our forums, and we are a support group out to help people, to try to get them to calm their fears and get them into a productive life. And here we are conversing with a dude who was a killer."

Denver FBI spokeswoman Rene Vonder Haar said the agency began an investigation immediately after receiving a phone call at 10:30 a.m. Sunday, but she refused to discuss the nature of the call.

Vonder Haar said the information was passed on to police in Arvada, where two members of Youth With A Mission had been killed earlier Sunday, and Colorado Springs.

On Wednesday, two services were planned to remember the four victims killed Sunday. Members of Youth With A Mission and members of New Life Church were to gather to worship, pray and mourn.

Arvada police spokeswoman Susan Medina said police cannot say with certainty who nghtmrchld26 is. Istre also said his forum agreed to turn over all relevant information, and provided the FBI the Internet Protocol address of nghtmrchld26 to help confirm the poster's identity.

The Denver Post reported Wednesday that Murray also was apparently posting to a different forum under the name DyingChild65, and may have foretold of his rampage there, too. In one posting, he references the one of the Columbine killers and the gunman who opened fire at Virginia Tech. He also mentioned Ricky Rodriguez, who stabbed a prominent member of a church once known as the Children of God, then shot himself in the head in 2005. The group had been accused of sexually and physically abusing child members during the 1970s and 1980s.

"Like Cho, Eric Harris, Ricky Rodriguez and others, I'm going out to make a stand for the weak and the defenseless this is for all those young people still caught in the Nightmare of Christianity for all those people who've been abused and mistreated and taken advantage of by this evil sick religion Christian America this is YOUR Columbine," the newspaper quoted the post as saying.

Ultimately, Istre said he believes the ex-Pentecostal forum helped the man, and he doesn't know what more the group could have done to prevent the bloodshed.

"My gut instinct is that he was coming on our forums and posting all this stuff to provoke a negative reaction to where he'd be rejected again, so he can have another trophy, to say, 'I've been rejected by another organization, so here is my chance to strike back at the world.' I think in our organization he discovered an acceptance he probably never ran into."

An autopsy Tuesday determined that Murray killed himself with a bullet to the head after he was brought down by gunfire from a volunteer security guard at the church, authorities said.