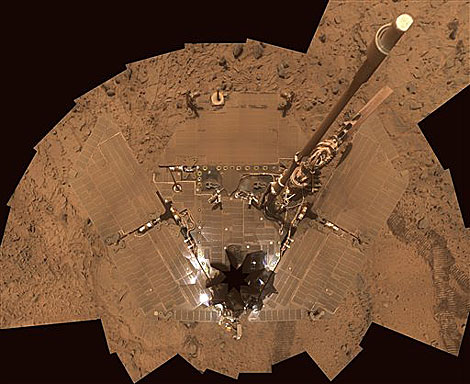 LOS ANGELES - Spirit, the scrappy robot geologist that captivated the world with its antics on Mars before getting stuck in a sand trap, is about to meet its end after six productive years.

Spirit has been incommunicado for more than a year despite daily calls by NASA. The cause of Spirit's silence may never be known, but it's likely the bitter Martian winter damaged its electronics, preventing the six-wheel rover from waking up.

The space agency for months tried every trick to listen for Spirit to no avail. Project manager John Callas of NASA's Jet Propulsion Laboratory said the last commands will be sent up Wednesday. Though orbiting spacecraft will continue to listen through the end of May, chances are slim that Spirit will respond. Callas said Spirit will be remembered for bringing Mars to the masses.

"Mars is no longer this mysterious, distant place," he said. "Mars is as familiar to us as any hometown, and it's because of Spirit."

The solar-powered Spirit and its twin Opportunity parachuted to opposite ends of the Martian southern hemisphere in January 2004 for what was supposed to be a three-month mission.

The golf cart-size rovers were an instant hit with the public who followed the rovers' every move as they rolled across the Martian plains and stopped to drill into rocks.

Their greatest achievement was uncovering geologic evidence that Mars, now dry and dusty, was far more tropical billions of years ago. The red planet was toastier and wetter, conditions that suggest the ancient environment could have been favorable for microbial life.

As far as sibling rivalry went, Opportunity was the overachiever while Spirit was every bit the drama queen underdog.

Soon after landing, Spirit went into critical condition and sent nonsense data back to Earth. Engineers had to nurse it back from the brink of death.

Unlike Opportunity, which landed in an ancient lakebed awash with water-forming minerals, Spirit plopped into a Connecticut-sized crater named Gusev that contained limited hints of past water.

Spirit had no choice but to trek toward the hills to make discoveries. It managed to shine despite having a rocky start on Mars.

In 2005, Spirit scaled a mountain the height of the Statute of Liberty. It also was the first to record Martian dust devils as they formed, which NASA later made into movie clips.

As the years passed, Spirit began showing signs of aging. In 2006, one of its front wheels stopped spinning, forcing the rover to drive backward and drag its lame wheel. More recently, it suffered bouts of amnesia by failing to record data to its flash memory.

Spirit survived three Martian winters, but the hardy rover was no match for the latest cold.

The troubles began in April 2009 when Spirit broke through crusty ground while driving backward and became bogged in a sand pit. During attempts to get it unstuck, one of the back wheels stopped working - essentially turning Spirit into a four-wheel drive.

Unable to provide roadside assistance, NASA declared an end to Spirit's mobile career in January 2010 - six years after landing - and it became a stationary spacecraft.

The woes continued when engineers failed in efforts to tilt Spirit's solar panels in a favorable position toward the low winter sun. With no way to power its heaters to stay warm, Spirit went into hibernation, its internal temperature plunging to minus 67 degrees Fahrenheit (minus-55 Celsius) - the coldest it has experienced on the red planet.

NASA had hoped to hear from Spirit when the seasons changed. Orbiting spacecraft passing overhead took turns every day hailing Spirit while deep space antennas in California, Spain and Australia listened for any peep.

Mission managers had been weighing whether to scale back the listening campaign to once a week. On Monday, Callas of JPL notified the rover team that he decided against that plan, saying that any continued effort will cut into other missions.

Spirit trekked 4.8 miles (7.7 kilometers) since landing. Its healthy twin Opportunity has logged 18 1/2 miles (30 kilometers) so far - surpassing the distance of a half marathon - and poked into three craters.

Opportunity has been trundling toward a large crater named Endeavour. It is currently less than 3 miles away, and if all goes as planned it should reach the rim later this year. Spirit is the second Mars spacecraft in three years to stop working. In 2008, NASA bid adieu to the Phoenix lander after five months of studying a Martian arctic plain.

Opportunity could soon get some company on the Martian surface. NASA later this year is expected to launch a megarover the size of a Mini Cooper that will land at a still-to-be-determined spot on Mars in summer 2012.