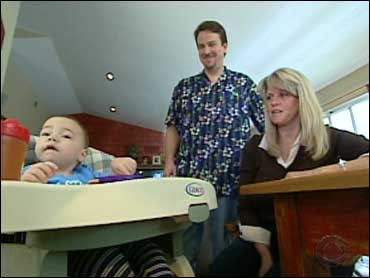 While the experts argue over whether there's one coming, Dean and Dori Julian say they're already living in a personal recession. Last September Dori was laid off from her job in the real estate business, CBS News correspondent Sandra Hughes reports.

"Came as a total shock," Dori said. "It's one day your working, and the next day you're not. You know we've got mortgages, we've got car payments and we just adopted a baby."

When the economy grinds to a halt, the average family loses $5,000 per year. This family of four is out twice that much - in one month.

"I'm probably going to be taking on a second job," Dean said.

"We took my 15-year-old out of a private school and put him in a public school system," Dori said. "We're talking about selling a car."

What happens in a recession?

Why are gas prices going up again?

Everything goes down. Income decreases and spending tightens, and that drives prices down.

Employment numbers decline and home sales go down, too.

And that's not news to Dean and Dori. They're trying to sell their vacation home, because while they saved for a rainy day, they never expected it to pour. They never imagined a recession.

What does it really mean?

"It's a day of reckoning, is what it is. People have to realize that things aren't gonna be perfect all the time," Dean said.

For now they're cutting coupons and watching lots of movies at home.

"Not going out to eat saves a lot of money," Dean said. "There's been a lot of cooking."

Dori said: "It could be another year before it even turns around. And that's what we're lookin' at. With the election year coming, it's just gonna be tough."

And it will stay tough, no matter what you call it.