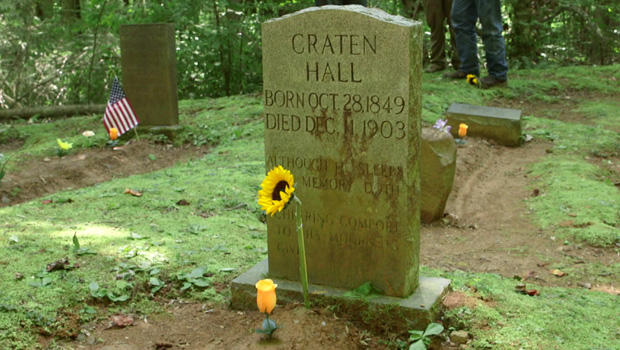 The Memorial Day we observe tomorrow was inspired by a Southern tradition called Decoration Day. It can be marked for private as well as public reasons, as Conor Knighton discovered in one of our National Parks - On The Trail:

It feels like a big family reunion … and in a way, it is.

Several different families have come together on this Sunday afternoon for a chance to be reunited with their ancestors.

"This is still home, even though it's never been my home," one man said.

In the South, it's what they call a "Decoration Day."  Flowers are carefully placed on the headstones.  There are songs, sandwiches, even a bit of scripture.

A preacher remarked, "Many years ago, right up on this hill, there was a whole lot of tears shed."

But this North Carolina Decoration Day can only happen on one day every year.

"Once a year to go visit your ancestors is not enough," Kansas Ray told Knighton. "Other people can just drive to their car to the cemetery, and we can't."

A visit to this remote cemetery begins with a boat ride across a lake. Then, it's a long wait for a chance to catch a bumpy ride up to the top of a mountain.

It's all because these graves are located inside of a National Park.

"Many of the people represented here today were uprooted for the creation of the park, and also when the lake was built," said Dana Soehn, a Ranger at Great Smoky Mountains National Park.

There were once six thousand homes here.  But in the 1940s, most of those settlers were forced to leave. The Fontana Dam, built by the Tennessee Valley Authority, was created to provide power during World War II. It flooded much of the nearby area.

"They built a dam, they pushed us out," remembered Mildred Cable Johnson. "We either had to leave or swim!"

"You're laughing about it now. Was that sad back then?" asked Knighton.

Johnson grew up in these hills. But when Uncle Sam came calling, her family packed up and moved. Fontana Lake was created, and the rest of the land became a national park.

"Back then, you respected and obeyed your government," she said.

The government made the displaced residents a promise: Once the war was over, they would build a road to provide access to those old family cemeteries.

The park calls it Lake View Drive. But drive for six miles, and this road just suddenly stops.  After environmental delays and financial concerns, the road was never finished.

It's part of Congressman Mark Meadows' district, a place he knows has a deep distrust of the federal government.

"You can't run for any elected office and come to Swain County without knowing about the 'Road to Nowhere,'" Meadows said. "When you've had promises broken so often and trust that has dissipated, it takes a while to gain that back."

In 2010, instead of finishing the road, the Park Service settled with Swain County for $52 million -- money that would go to support area schools and local programs.

But, seven years later, less than a fourth of that has been paid. The Park Service says Congress needs to put the money in the budget, which it hasn't done.

Congressman Meadows points to a Government Accountability Office study that states the Park Service could actually pay the entire amount due. "The frustration of the bureaucracy on why the people of Swain County can't get the money that they're owed is just mind-boggling," he said.

That frustration has led Swain County to sue the federal government for the remaining $39.2 million.

CBS News first visited back in 1978, when -- in an attempt to make things right -- the park began offering trips across the lake for the families. (Watch video at left.)

The former residents gained permission for a series of one-day visits. For most, it was the first time they'd been able to return in 35 years.

"We're not legally mandated to do such a thing, but it's the right thing to do, and it allows us to continue telling this story," Ranger Soehn said.

That's what these Decoration Days are all about. "You see people your mother grew up with, and hear stories about what it was like to live here," one person said next to a gravestone.

It's a chance to remember the settlers who once called this place home. "It was all a huge community who depended on each other," said Kansas Ray. "So the old saying, 'It takes a village'? That came from communities like this."

For an afternoon, at least, there was a community thriving again in these hills.

Knighton noted, "We ate really well -- there was some pretty great food."

That road that was promised long ago isn't coming, But these families keep coming back every year.

The land is already preserved -- it's the heritage they want to make sure survives.

Also visited by Knighton while "On The Trail":