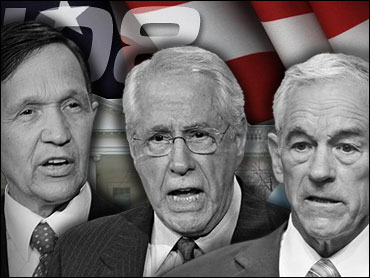 This column was written by Nicholas von Hoffman.

Why do they run? Don't they know they do not have a snowball's chance in hell of getting the nomination? What are they in it for? The lecture fees? Or are they egomaniacs who accept the ridicule if that's the price of fifteen minute's worth of Secret Service protection?

Now that we are in the debate season, fringe candidates are placed on the wings of the line of podiums up on the stage. Mainstream candidates, the frontrunners, get the middle positions and are asked the most questions. As time passes and we move closer to actual voting, the fringies get shoved so far out on the margins you cannot see them anymore. They are gone with whatever it was they were peddling.

The studio analysts, those fanny-dragging voices of conventional banality, dismiss them with a light hand and the merest suggestion that they are political straight men on stage to offer themselves up for a laugh or two at their own expense. You must listen closely to recognize that what these overly sincere crackpots may be peddling is exactly what their parties say they believe in and stand for.

We had a small dose of that the other night at the CNN-sponsored debate in New Hampshire with Congressman Dennis Kucinich of Cleveland, where many years ago he was the mayor. He lost his job and got ridden out of town in part because he would not go along with privatizing the municipally owned electric utility. They cursed him then, and now, in the post-Enron age, they bless him. Today he is a sparse vegan of a man whom the big guys love to ignore, although he does not make it easy to be overlooked.

The mainstreamers were rattling on to the effect that, of course, they are against the war; they just do not have enough votes to pass a law ending it. Then Kucinich was given the microphone for a moment and said that Congress can stop the war whenever it wants, not by passing a law the President will veto but by not passing any war appropriations bill at all. Just do nothing and Mr. Bush will have no money for the war and the troops come home.

The fringers are always coming up with practical ways to do politically impractical things. The practical way to establish universal health insurance, Kucinich reminded his timid, mainstream competitors, is to kick all the insurance companies out of medicine and replace them with a single-payer program based on the Medicare model, which has worked with brilliant success for more than forty years. The money saved would be greater than that which the insurance industry spends on lobbying and campaign contributions. So much for the voice from the fringe.

The Republicans have their fringies, too. Ron Paul is a physician (Duke University medical school) and a Congressman from Texas. The list from his website of what he is for and what he is against tells why his mainstream colleagues would delight in cutting his tassels off if they could:

Like Paul, Kucinich also voted against the war and the Patriot Act, and they both despise NAFTA.

Besides having some positions in common, the two may be the only voices in their respective parties you will hear on primetime spouting important but painfully difficult positions. If Ron Paul does not bring up the subject of habeas corpus to the Republicans, who are supposed to put great stock in such traditional bulwarks of liberty, the other men lined up on the stage will not. If Dennis Kucinich does not tell the Democrats that when it comes to bombing, shooting and war, it is bite-the-bullet time in Congress, rest assured nobody else will.

There is a place for the fringe, and it is not on top of the surrey. It's in the debates.
By Nicholas von Hoffman
Reprinted with permission from the The Nation