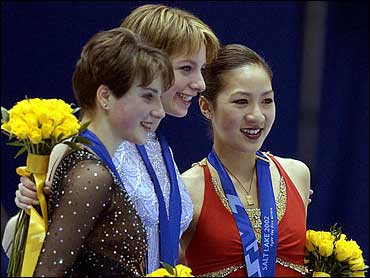 A Russian protest seeking a duplicate gold medal for Irina Slutskaya in women's figure skating was rejected Friday by the International Skating Union.

"The protest has been denied," ISU spokeswoman Aline Busset said.

She said details would be included in an official statement released later in the day.

Slutskaya appeared shocked when the gold medal went to America's Sarah Hughes on Thursday night. The Russian skating federation quickly protested, seeking a duplicate gold just as was awarded to Canadians Jamie Sale and David Pelletier in the pairs.

Slutskaya got her highest marks from judges from Russia, Slovakia and Bulgaria, while the Canadian and American judges went for Hughes, who went from fourth to first by winning the free skate.

Earlier Friday, Viktor Mamotov, the head of the Russian delegation in Salt Lake City, said, "We filed the protest last night because we think the judging was biased. Canadian pairs skaters were awarded their gold medals. Now that subjective judging harmed us, we want the same for Slutskaya."

Russian indignation spread all the way to the Kremlin, where President Vladimir Putin suggested there was a reason Americans were doing so well in the games - they had the judges on their side.

South Korea was also unhappy. They were upset over a referee's ruling that cost one of its speedskaters a gold medal that went to America's Apolo Anton Ohno. The Koreans, though, backed off earlier threats to boycott the closing ceremony and sue.

It was the Russians who had the most complaints, and they weren't hesitant to voice them loudly. If nothing else, they figure they have precedent on their side.

The Canadians used the same tactic to whip up public frenzy to get their pairs figure skating team an unprecedented duplicate gold medal.

The Russians, however, had problems getting others to see the connection.

Russia's contention that the fix was in for the women's figure skating final was more difficult to push than the pairs skating dispute, in which a judge was disqualified.

It wasn't just the Russians' protests that had Olympic officials scurrying to pacify them Friday with condolences and promises that they would be treated fairly. It was the tone that was surprising.

Though Putin later said the team would stay, the Russians first threatened to pull out of the games and said they also might not attend the Summer Oympics in Athens two years from now.

"Without Russia, the Olympic Games will be lost," said Vitaly Smirnov, an IOC vice president from Russia.

The women's figure skating concluded on a day when a Russian cross-country skiing favorite was disqualified following a blood test, and the Russians alleged that Olympic hockey officials were biased against them.

Some of the complaints may have been borne of frustration. Through Friday, Russia - a traditional winter sports power - was in fifth place in the overall medal standings with 14 medals.

At the same time, the United States was enjoying its best Olympics ever by far, with 30 medals.

Top Olympic officials met with the Russian delegation, with IOC president Jacques Rogge sending Putin a letter assuring him that the games were fair and his nation's anger understood.

In Russia, though, the words rang hollow.

State-controlled ORT television had planned live coverage of Thursday's cross-country race, but after Larissa Lazutina was disqualified, the station cut the broadcast off in mid-race in protest.

Renowned Russian film director Nikita Mikhalkov told the network that this year's Olympics were "a continuation of the Cold War."

"Perhaps it is caused by fear among the American people after the horrible day of Sept. 11 or fear that we (Russians) now have hope of climbing out of the hole we have fallen into and could be dangerous, so they have to humiliate us," he said.