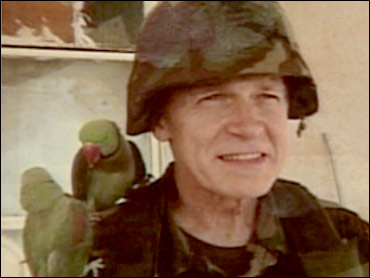 While most older Americans are slowing down during their golden years, a few retired soldiers are actually being asked to return to active duty.

CBS News correspondent Lee Cowan caught up with two dedicated men who are headed to Iraq to fill a serious shortage.

At 68, John Wicks may look the part of grandfather, but at Fort Bliss, Texas, this man, old enough to collect Medicare, is in training for the part of warrior. And he is doing it at the Pentagon's request.

Col. Wicks says, "I wouldn't have felt right saying no."

Two years shy of his 70th birthday, he's one of the oldest soldiers ever to be deployed to Iraq. Coaxed out of retirement to fill a desperate need, he tells Cowan he is ready to serve.

His well-worn face is evidence of years of military service: 2 years of active duty as a Marine, 24 years in the Arkansas National Guard, and a stint as a medic in the first Gulf War.

His son thought that was the last time he would send his father into combat. Apparently, he was wrong.

Marty Wicks says, "There must be a demand if they are going to call somebody who is 68 years old to Iraq."

Demand indeed. His father's formal training is as a psychiatrist. And with more and more soldiers suffering from combat-related stress in Iraq, his counseling expertise outweighs any concerns about his age.

Col. Wicks notes, "I know there are some that are severely disturbed, some that are going to have to be evacuated, to be given more treatment."

The Army reports the suicide rate in 2003 among soldiers in Iraq is 35 percent higher than it is for soldiers serving anywhere else - 17 out of every 100,000. But military say the suicide rate has improved in the first six months of 2004.

An unidentified solider who claims he was nearly one of them said he was laughed at when he tried to seek help.

He says, "Unless something changes over there, you're going to have a lot more body counts on our own side and they're not from the enemy either."

With fewer and fewer full-time soldiers, and no draft to replenish the ranks, the war on terrorism has forced the military to dig deep - especially for those with specialized training.

Col. Wicks isn't the only one.

Col. Charles Ham is also a psychologist. He says, "In December I got a call saying that they wanted me to go back on active duty after seven years of retirement."

At 67 - with 4 decades of military service already under his belt - he's bringing his uniform out of mothballs yet again.

Col. Ham says, "I would think they would want younger people, rather than an old man like me."

Marty Wicks says, "He's going to the most dangerous place in the world right now, and we're all concerned about him."

But with age comes wisdom - even in war. And patriotism doesn't come with an age limit; neither does a sense of duty.

Col. Wicks adds, "I like to get up in the morning and put on that uniform, still do."