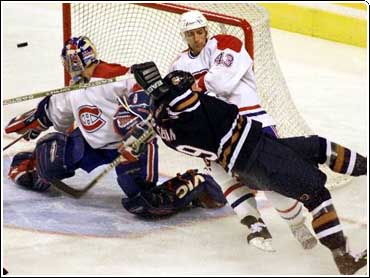 Jason Smith was an unlikely offensive hero for the Edmonton Oilers.

Smith took a pass from Bill Guerin on a 2-on-1 break in overtime and beat goalie Jeff Hackett with a low wrist shot to give the Edmonton Oilers a 5-4 victory over the Montreal Canadiens.

"I was kind of excited just to get the opportunity to be up the ice. I don't get these 2-on-1s too often," said Smith, a stay-at-home defenseman with 11 goals in 392 NHL games..

"I was kind of hoping Bill would shoot so I wouldn't get the puck. But he made a great pass."

Guerin, who scored late in the first period to give Edmonton a 3-2 lead, was just happy he had enough strength to make the pass.

"I think Smitty and I barely made it down the ice because we were so tired, but things happen in a funny way and that was one of them," Guerin said. "I don't know if I could have made it off the ice if we hadn't scored."

Montreal's Trevor Linden had his first hat trick since March 9, 1996. Dainius Zubrus also scored for Montreal, which lost for the first time at home in 2000 (4-1-3).

"We'll look at it as taking a point an go from there," Linden said. "We were pushing to get the win, but being down 4-2 in the third against the win, we'll take what we got and work on some things in practice tomorrow."

Linden's third goal came on the power play at 17:36 of the third. Martin Rucinsky's pass went off Linden's skate and past Salo from just outside the crease.

Linden also scored twice in a 90-second span midway through the first period after Edmonton took a 2-0 lead.