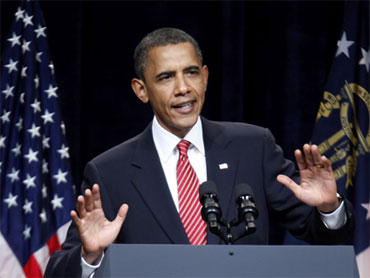 Voters in Kansas, Michigan and Missouri go to the polls today to select candidates ahead of the November general elections.

Democrats hold a comfortable 39-seat majority in the House of Representatives but are in real danger of losing that majority to the GOP. The president will do his part to help retain control of Congress, but a lot of his work will be behind the scenes.

On Monday Mr. Obama came out swinging at the minority party, but with an approval rating at 44 percent, he fired his shots from a Democratic fundraiser, rather than at a candidate's campaign event.

"It'd be one thing if Republicans had seen the error of their ways, right?" he told a crowd in Atlanta. "I mean, if after the rejections of 2006 and 2008, realizing, 'Gosh, look at this big disaster that we caused and taking record surpluses into record deficits and causing all this hardship - we're going to rethink our approach and go out in the wilderness for a while, come back with some new ideas!' But that's not what happened.

"It's not like they've engaged in some heavy reflection," the president said. "They have not come up with a single, solitary, new idea to address the challenges of the American people. They don't have a single idea that's different from George Bush's ideas - not one."

"When the economy is bad, the president gets blamed, and so the president is not somebody you want around in a district where people are angry at Washington," said CBS News political analyst John Dickerson.

But the president can (and does) deliver the Democrats' message - that Republicans would go back to policies of the past.

"They're counting on, that you all forgot!" Mr. Obama said to laughs. "They think that they can run the okey-doke on ya, bamboozle ya."

Appearing on "Fox News Sunday," ex-Alaska Governor Sara Palin said that it was the president who was looking into the past.

"It just amazes me that he continues to look backwards and blame solely President Bush for the conundrum that we're in right now," she said.

Aware they have a fight on their hands, Democrats are shelling out big bucks to retain control of Congress - $20 million for House and Senate campaigns, and an additional $30 million for voter turnout - as the president drives the message home.

"They're more interested in the next election than the next generation," Mr. Obama said of Republicans. "And that's why they can't have the keys back - because we need somebody who is driving with a vision to the future."

The big thing, and probably the best thing, that the president can do for his party right now, said Plante, is raise money. Despite his lowered popularity, he's a fundraising rock star - a very similar position to what President George W. Bush was in during the last few years of his second term.

On CBS' "The Early Show" this morning, Democratic strategist Tanya Acker said the most important thing Democrats can do to keep their majority is to "tell the story" of the party's agenda and success.

"The reason why the party in power tends to lose seats is because that party has not very many excuses for explaining to voters why things haven't changed, why things haven't been done, and Democrats have a story to tell," Acker told anchor Erica Hill. "They need to tell the story that health care reform is going to help people, they need to tell the story that we don't want to go back to a policy - we don't want to cede control of the country to a party that thinks we should apologize to British Petroleum and filibuster jobless benefits."

"Campaigns are always a contest about vision for the future," he said.

When Hill asked if Republicans are united in their story and vision for the future, particularly owing to opposition within the GOP from elements of the Tea Party, Madden said, "Well, we're working on it.

"But I think that the thing right now is that we're in an enviable position of being seen as the alternative. And right now when you see such anger at Washington, that's a very good place to be.