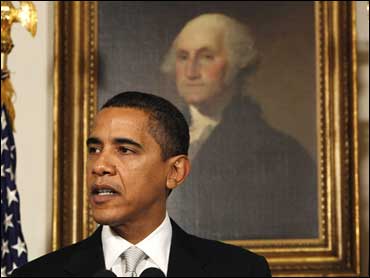 (AP)
After meeting with Treasury Secretary Timothy Geithner and members of the Senate Banking Committee and the House Financial Services Committee, President Obama this afternoon laid out the "core principles" he believes are necessary in reforming financial markets.

"The choice we face is not between some oppressive government-run economy or a chaotic and unforgiving capitalism," the president said. "Rather, strong financial markets require clear rules of the road, not to hinder financial institutions, but to protect consumers and investors, and ultimately to keep those financial institutions strong."

The core principles laid out by the president were:

2. A regulatory system strong enough "to withstand both system-wide stress and the failure of one or more large institutions."

3. A greater effort to foster "openness, transparency and plain language" in the financial system.

4. "Strong and uniform supervision" of financial products being marketed, based on actual data.

5. "Strict accountability, starting at the top," with executives "who violate the public trust" being "held responsible."

6. An effort to ensure that those being regulated can't "cherry-pick" between competing regulations and that there are not gaps in the regulatory system.

7. A recognition that regulatory challenges are global – "So as we work to set high regulatory standards here in the United States, we have to challenge other countries around the world to do the same."

Mr. Obama's full remarks, as prepared by the White House, are below.

THE PRESIDENT: Hello, everybody. This afternoon, I met with members of my economic team and some key leaders in Congress to discuss the threats to our financial markets in this new century and how we must transform our regulatory system to meet them.

In recent months, we've seen turmoil on Wall Street like we haven't seen in decades, as major financial institutions have faltered or have been sold off. And we have seen the fallout on Main Street, as the market crisis became a credit crisis, and families struggle to get loans to buy a home or a car, to start a small business or to pay for college.

This financial crisis was not inevitable. It happened when Wall Street wrongly presumed markets would continuously rise, and traded in complex financial products without fully evaluating their risks. Here in Washington, our regulations lagged behind changes in our markets -- and too often, regulators failed to use the authority that they had to protect consumers, markets and the economy.

We now know from painful experience that we can no longer sustain 21 -- 21st century markets with 20th century regulations, and that while free markets are the key to our progress, they do not give us free license to take whatever we can get, however we can get it.

But let me be clear: The choice we face is not between some oppressive government-run economy or a chaotic and unforgiving capitalism. Rather, strong financial markets require clear rules of the road, not to hinder financial institutions, but to protect consumers and investors, and ultimately to keep those financial institutions strong. Not to stifle, but to advance competition, growth and prosperity. And not just to manage crises, but to prevent crises from happening in the first place, by restoring accountability, transparency and trust in our financial markets. These must be the goals of a 21st century regulatory framework that we seek to create.

Our meeting today was a critical first step in developing that framework. And I'm grateful for the legislative leaders who join me here with Secretary Geithner and Dr. Summers. We had a terrific conversation. I think this is an area where there is a growing consensus and where I think the capacity for people from different political parties and different perspectives to come together and solve problems.

I've asked my economic team to develop recommendations for regulatory reform, and then to collaborate with these members of Congress and others from both sides of the aisle so they can start crafting legislation in the coming weeks and months.

We will not always see eye to eye in our work. We may disagree -- and disagree strongly -- about particular provisions. But there are certain core principles that I believe must shape any proposal for reform -- and these are the principles that will guide our work.

First, financial institutions that pose serious risks, systemic risks, to our market should be subject to serious oversight by the government. And here's why. When the Federal Reserve steps in as a lender of last resort, which it's had to do repeatedly since this financial crisis began, it's providing an insurance policy underwritten by the American taxpayer. And taxpayers should be assured that the Fed thoroughly understands the institutions that it is effectively insuring and actively monitoring them to make sure that they're not taking risks that will cost taxpayers in the long term.

Second, our regulatory system -- and each of our major markets -- must be strong enough to withstand both system-wide stress and the failure of one or more large institutions. And that means modernizing and streamlining our regulatory structure, and monitoring both the scale and scope of risks that institutions can take.

Third, to rebuild trust in our markets, we must redouble our efforts to promote openness, transparency and plain language throughout our financial system.

Fourth, we need strong and uniform supervision of financial products marketed to investors and consumers. And we should base this oversight not on abstract models created by the institutions themselves, but on actual data on how actual people make financial decisions.

Fifth, we must demand strict accountability, starting at the top. Executives who violate the public trust must be held responsible.

Sixth, we must make sure our system of regulations covers appropriate institutions and markets, and is comprehensive and free of gaps, and prevents those being regulated from cherry-picking among competing regulators.

Finally, we must recognize that the challenges we face are not just American challenges, they are global challenges. So as we work to set high regulatory standards here in the United States, we have to challenge other countries around the world to do the same. That's how we will stop financial crises from spilling across borders and prevent global crises of the sort that we now face.

In the end, the work of constructing a new regulatory framework will not be easy -- and reform will not happen overnight. But we must never forget that our market has always been the engine of America's success -- rewarding innovators and risk-takers, creating opportunities for generations of Americans and prosperity that is the envy of the world.

And I have the utmost confidence that if these outstanding public servants standing beside me are working in concert, if we all do our jobs, if we once again guide the market's invisible hand with a higher principle, our markets will recover. Our economy will once again thrive, and America will once again lead the world in this new century as it did in the last.

So, thank you very much, everybody.