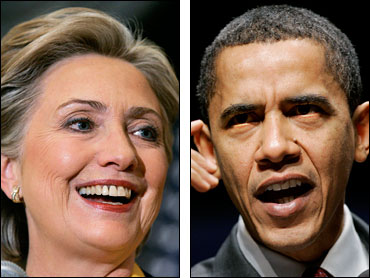 On the surface, Barack Obama may have looked like he was enjoying himself.

"All right, I'm having too much fun here," he said at a campaign event. "I need - I need to do some business."

But that business has his campaign privately seething because much of it involves fighting back against what he calls the Clinton political machine, CBS News correspondent Dean Reynolds reports.

"If people are making false assertions about our record then we answer them - period," Obama said.

At issue is a Clinton advertisement accusing Obama of various transgressions, including being a big fan of Ronald Reagan and his Republican policies.

"Hillary Clinton will say anything to get elected," the ad declares.

Obama said it was self-defense. "All I'm concerned about is making sure my record does not get distorted," he said.

The Clinton campaign pulled the ad in question from the airwaves today. But Obama's camp sees it as part of a Clinton strategy which combines distortions with low-ball expectations - all the while working as hard as possible to win South Carolina.

None harder than the former president, whose attacks on Obama's integrity are drawing headlines, but also drawing attention away from the candidate he favors.

Today she unveiled an economic stimulus package but wound up vying for attention because of the focus on her husband.

"Until about a day or two, you could have gotten some people to say, whether deliberate or not, this is serving the Clinton campaign well by pushing Barack Obama off his central message that he can transcend the political arguments of the 1990s, that this 'he said, she said' fight is actually disturbing him," CBS News senior political correspondent Jeff Greenfield said.

"You've had editorials really coming down very hard on the Clinton's for distorting Obama's record. Some of his supporters like Claire McCaskill, the senator from Missouri, and former Senate majority leader Tom Daschle are invoking some very harsh notions of dirty Washington tricks."

Possibly more telling was the staff members' efforts to limit his contact with the news media today.