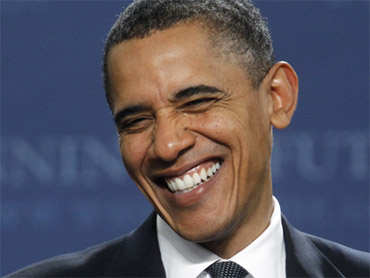 STATE COLLEGE, Pennsylvania - President Barack Obama is hinting on Pennsylvania soil that he might cheer for Pittsburgh's beloved Steelers when they meet the Green Bay Packers in the Super Bowl on Sunday.

Obama told a crowd at Penn State University that "I've got some love for the Steelers."

But Obama also noted he'd visited a factory town near Green Bay just last week, and he'd come to Pennsylvania "in the spirit of fairness" to wish Steeler fans good luck as well.

The president appeared to be trying to straddle two crucial electoral states after supporting his hometown Chicago Bears earlier. Obama previously said he wouldn't take sides in the Super Bowl, after his Bears were knocked out of the playoffs by the Packers.

Last week during a YouTube chat, the president was mum when it came to divulging which team he'll root for on Super Bowl Sunday.

"Now that the Bears have lost, I've got to stay neutral," he said. "Absolutely neutral on this one."

On Thursday the president was taking his retooled economic pitch to the heart of Pennsylvania, a prominent state in presidential politics that will be a key in his 2012 re-election bid.