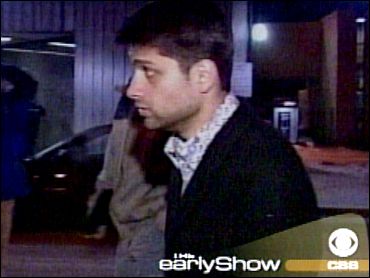 A Moroccan jetliner flying from New York to Morocco was diverted to an airport in Maine and authorities are trying to sort out the reasons behind the action.

A Chicago man is in custody and the interrupted flight is once again back in the air and on its way, reports CBS News correspondent Bob Orr, while the FBI investigates the bizarre scare that had them scrambling in the middle of the night.

Flight 201 landed safely in Bangor, Maine, after federal authorities were told a passenger on board threatened to blow up the plane. The Boeing 767 was taxied to a secure part of the airport, where 79 passengers and crew members were evacuated from the plane and screened for possible explosions.

Sources say one of the passengers, identified as Zubair Ali Ghias, twice phoned his wife with frightening messages. Officials said he had been missing since Saturday and had called saying "I've been captured by al Qaeda. They want me to do something for them. I love you, I just gotta do this."

His wife called a television station, which in turn called the FBI.

The FBI received information from a media outlet about the possibility of someone with a bomb on board.

Officials say no explosives were found and Ghias, in the end, presented no real threat. He had been flagged by security at JFK as he was leaving because he claimed no luggage for an overseas flight, Orr reports. That alone played a big role in deciding to turn the jet around.

A private investigator in Chicago said Ghias, an investment banker, had called his family from the plane before it left New York Thursday and the investigator said he had also alerted the FBI.

Ghias was last seen by his family on Saturday and Rizzo, who was hired to investigate, tracked Ghias to New York through his credit cards.

Rizzo said Ghias had apparently used the cell phone of another passenger. Rizzo called back the number, and the passenger confirmed the flight number. Rizzo said he summoned the FBI to the family's apartment, and the FBI questioned the family.

The FBI in Chicago referred queries to the FBI in New York, which said no one would be available until Friday morning. There was no answer at the FBI office in Portland, Maine.