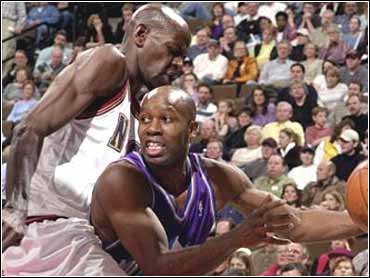 A year ago, the Denver Nuggets were 17-15, then promptly lost their next six games, never seeing .500 again.

On Friday night, Denver was 17-15 before beating the Utah Jazz 100-87, showing signs its season might be headed in a different direction this time.

If so, it probably will be because Antonio McDyess and Nick Van Exel take them there.

McDyess scored 31 points and had 13 rebounds his seventh straight double-double and Van Exel added 25 points as the Nuggets handed the Jazz their fifth straight loss.

"Nick and Antonio were both terrific tonight," Nuggets coach Dan Issel said. "(Utah's) Karl Malone and John Stockton are the measuring sticks for power forwards and point guards in this league, and I think our two kids measured up pretty darn good."

Malone led the Jazz with 33 points, and Stockton had 14.

"Van Exel got right on top of the basket and made shots," Utah coach Jerry Sloan said. "He had a terrific run when we couldn't understand what we were trying to do with him. Whehe has a good game against us, we have a tough time. We weren't able to answer him at all.

"We're struggling. We haven't deserved to win. If you are not tough enough to fight through those things mentally, it is going to be difficult to win."

Sloan said the Nuggets "have as good a chance as anybody" at gaining the eighth playoff spot in the Western Conference, adding, "I wouldn't know why they would be thinking about just getting to the eighth spot, as good as they are."

Van Exel, however, refused to listen to any premature playoff speculation.

Asked if he wasn't encouraged about beating Utah, Van Exel said, "We're the Denver Nuggets. It's important for us to beat everybody. When a team like Utah is struggling, you'd better take advantage of it because they're not going to struggle all season."

Issel was ejected midway through the third quarter after being assessed technical fouls 30 seconds apart.

Utah was without starting guard John Starks, who was serving the first game of a two-game suspension for violating club policy.

McDyess outscored Malone 15-13 in the first quarter as the Nuggets took a 27-25 lead. During one stretch, McDyess scored nine straight Denver points while Malone had eight of 10 Jazz points.

Van Exel hit a 3-pointer midway through the second quarter to put Denver ahead 34-29. After Stockton's 3-pointer produced a 36-36 tie, the Nuggets scored six straight points, including back-to-back fast-break layups by Van Exel, the latter after he stole an inbounds pass at midcourt.

Olden Polynice had eight points in the period for the Jazz, who trailed 47-41 at halftime.

The Nuggets overcame a flurry of technical fouls in the third quarter to emerge with a 74-66 lead at the end of the period.

Raef LaFrentz's three-point play early in the period put Denver ahead 53-42, but the Jazz chipped away and cut the margin to 57-54 with 6:36 left after Stockton made a free throw on a technical foul against Van Exel, and Bryon Russell hit two free throws on a flagrant foul called on Van Exel.