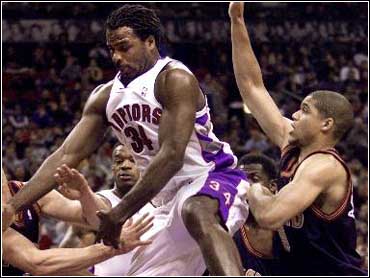 Antonio McDyess' quick comeback was all the Denver Nuggets needed.

"It's a good feeling. We just tried to get off to a good start," said McDyess, who had to ice his left ankle after slightly twisting it during the game. "This is one of the best teams in the Eastern Conference. We feel like we got a lot of confidence from this game."

Raef LaFrentz had 18 points and a game-high 14 rebounds, and Nick Van Exel added 17 points for the Nuggets, who won for the second time in their last three games after losing nine straight.

Vince Carter, who struggled early, scored 27 second-half points to finish with 31 for Toronto. Antonio Davis added 14, while Muggsy Bogues had 11 points and a season-high eight rebounds.

"(Carter) was like night and day," McDyess said. "He came out and played like he was the worst player in the league and then he played like Michael Jordan in the second half."

The Raptors, who trailed by as many as 23, fought back in the fourth quarter.

Davis had two dunks to make it 82-79 with 4:49 remaining. A few minutes later, Carter made a great under-the-basket layup with 1:03 left to close the gap to 86-84, but McDyess answered with a tough off-balance jumper.

"Antonio is our main guy. We will win or lose with him," Nuggets coach Dan Issel said. "I was nervous when he was limping off the court but he showed his character by coming back and playing."

Van Exel, 8-for-8 from the foul lin, made six straight free throws in the last 12 seconds to seal the victory.

"Everytime we pulled away they'd get right back into the game," Van Exel said. "They're a veteran team with an offensive and defensive game plan and they stuck with it until the end."

Carter, criticized by Raptors coach Butch Carter because of a poor first half in Indiana on Wednesday, suffered through another tough opening half in making only 2-of-12 shots to finish with just four points and no rebounds.

The Raptors started the game with extremely poor shooting, hitting just 26 percent of their shots in the first quarter. Carter dished off on a tough jumper late in the quarter to Kevin Willis, who missed an easy open jumper.

The Nuggets picked up the rebound, leading to a great spin around layup by Tariq Abdul-Wahad to open a 29-16 lead heading into the second quarter.

"I worked them too hard in practice and we had some guys who were mentally fatigued," coach Carter said. "They were beat and Tracy McGrady was sick."

Denver continued to press as it went on a 10-0 run, capped by Keon Clark's dunk to give the Nuggets a 39-16 lead midway through the quarter.

Carter, who had 16 points in the third, scored 10 straight points for the Raptors to get Toronto within 10 when he made a nice cut to the basket and blew by three Nuggets players to close it to 74-64 entering the fourth quarter.

The Nuggets also blew out the Raptors the last time the teams met, 109-84 in November.