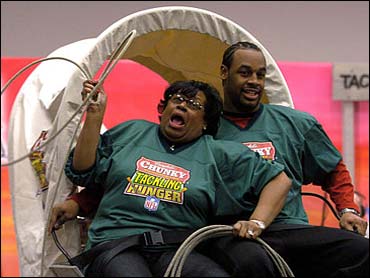 That is how the mother of Philadelphia Eagles quaterback Donovan McNabb is addressed on the street by fans who recognize her from the Campbell Soup commercials she did with her son.

"They do a lot of that: I better not be close to another fast food restaurant. They say, 'That's not Chunky Soup,'" Mrs. McNabb jokes to The Early Show co-anchor Harry Smith.

Four years ago, an actress played the part of her son's mother on the commercial.

That only lasted one season, partly a result of Mrs. McNabb lobbying Campbell's Soup, through the Professional Football Players Mothers Association (she is the vice president), to keep it real.

"People always thought those were the real moms, but it wasn't. So we're just really happy they're using real moms," McNabb says.


"We went to the taping of the first two Donovan had with the actress and I had seen the script already," Wilma McNabb says, "I knew the script and I'm pantomiming while she's doing her thing. And I said, 'I can do that.' And I kept saying, 'I can do that,' and I talked to the producers of the advertising agency, and I said: 'No, really; we could do that; why don't you use the real moms.' So the next year, they decided let's give it a try."

McNabb is convinced reality has a better effect. By the way, she's better known to her friends by her middle name, Charlene. Her pal Linda Harrison, mother of Indianapolis Colts' receiver Marvin Harrison, calls her "Star Char."

In real life as well, McNabb likes to help feed her son and his Philadelphia Eagles teammates.

"Every time they come to Chicago, I have to make sure my team eats, and they eat really a lot," she says. "We have to have a lot. It's expected. So I have no other choice, but to feed my team."

Before the Eagles beat the Bears in Chicago this past October, many of them feasted on macaroni and cheese, red beans and rice, greens and sweet potato pie - much of it homemade by McNabb and delivered to the team's hotel.

"Donovan loves the red beans and rice," she says, "And macaroni and cheese is his favorite."

Asked if she knew when he was a little boy that he was going to become a super star, she says, "Not at all. You just want your children to grow up to be successful college graduates and go on to make their own way in life. But he chose sports and that was a good thing. It kept him busy and kept him focused and in his books. That was the means kind of thing. So, No, I didn't expect that until we started seeing it coming out of Syracuse."

Now, McNabb, who used to work as a pediatric nurse, runs the Donovan McNabb Foundation in suburban Chicago and oversees her son's business along with her husband, Sam McNabb. Her business is Donovan's business. It's become her second career. And the multimillionaire NFL quarterback is about to play in his first Super Bowl.

"It seems that it was a long time," McNabb says. "But when you think about it it wasn't really that long and that's the way it happened. Now we're really ready for it."

The Philadelphia Eagles beat the Atlanta Falcons, 27-10. Now, McNabb is getting ready to head to Jacksonville, Fla., to watch her favorite team play in Super Bowl XXXIX.