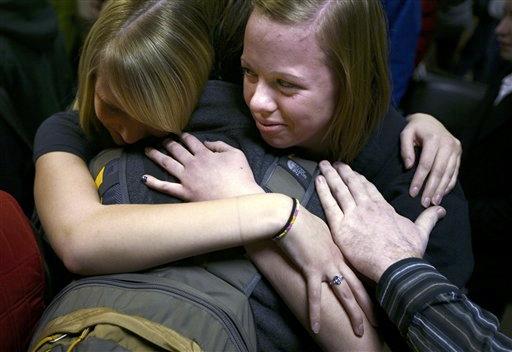 CAIRO (AP) - The U.S. began evacuating nonessential government personnel and their families Wednesday, while crowds piled up at Cairo's airport as more than 8,000 people played the odds in hopes of securing a seat aboard a commercial airline that would allow them to escape the chaos engulfing Egypt.

Thousands of passengers were packed into the airport early Wednesday, with more expected to arrive in the early afternoon before the start of a curfew that Egyptian state television said had been pushed back to 5 p.m. The influx of passengers came as demonstrators demanding President Hosni Mubarak's ouster clashed with the leader's supporters - some riding horses and camels - in central Cairo in a fresh outbreak of violence in the week-old protests.

The U.S. Embassy said it expected to evacuate more than 1,000 Americans from Egypt over the next two days, including government personnel and other citizens in the country. The State Department issued a mandatory evacuation order Tuesday for non-emergency government staff. Other Americans wishing to leave Egypt amid the unrest that has engulfed the country would also be accommodated.

"Things are going very smoothly," Roberto Powers, the U.S. consul-general in Egypt told The Associated Press. "Anyone wishing to travel today - there are spaces available."

At least two U.S. chartered planes had either taken off or were nearing departure, and other flights were planned, embassy officials said.

For others, efforts to flee the country were not going as easily.

Airport officials said more than 18,000 passengers had been massed in about three departure terminals on Tuesday, more than half of them boarding special flights sent in by their governments.

"I have been at the airport since 3 p.m. yesterday. My flight was supposed to leave at 6 a.m. this morning, but now they're saying at 3 p.m.," said Carol Mangrum, a Clarksdale, Mississippi-resident who was on vacation in Egypt on Wednesday. "I've been here at the airport the whole time. I'm tired, but anxious to go home."

The exodus of foreigners, and some Egyptians, reflected the unease and general weariness of many with the standoff between Mubarak and the tens of thousands of protesters demanding his ouster.

About 100 Germans left Alexandria on Tuesday and another 1,000 flew out of Cairo, Foreign Minister Guido Westerwelle said, adding that 10 consular officials were at Cairo airport while four were in the Red Sea resort of Hurghada and two in Luxor.

Britain, which has not ordered diplomatic staff to leave Egypt, said a chartered flight was leaving London at midday on Wednesday and would return Thursday with British nationals stranded in Cairo. It has advised its citizens in Egypt to leave, if possible. About 15,000 British tourists are also vacationing in the calmer Red Sea resorts that have been spared the mayhem in Cairo and Alexandria.

The government also defended its levying of a roughly $480 charge per seat on the aircraft, saying it did not want to undercut commercial services operating between Britain and Egypt.

The U.S. government will also bill Americans who opt to take one of its charter flights. While the cost has not been disclosed, officials said it was comparable to what a regular flight between Cairo and the safe haven destinations - Germany, Greece, Turkey and Cyprus - would cost.

The curfew, which until Wednesday ran between 3 p.m. to 8 a.m., had forced many airlines to readjust their schedules to account for the times when passengers would be able to come to the airport. Several temporarily suspended flights.

National carrier EgyptAir had organized just 29 or its 148 scheduled international and domestic flights. The airline has been canceling as many as 75 percent of its flights because it was unable to field enough crew, in part because of the curfew.

In a reflection of the hit Egypt's vital tourism sector was experiencing, the airport's arrival hall was largely empty. The only people moving through were journalists flying in to cover the country's protests, as well as a group of about 345 Sudanese, Yemenis who came for a visit to Egypt, airport officials said.

Associated Press reporters from across Europe contributed to this report.