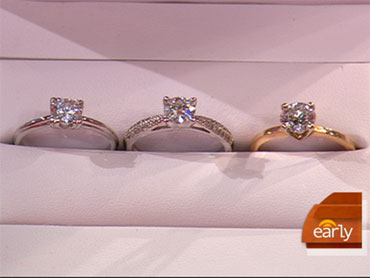 Diamonds have been used for centuries to show eternal love. But today, not all brides will walk down the aisle wearing a diamond ring. In an effort to save some money, some couples are bucking the trend and are trying out some sophisticated diamond alternatives.

Jerry Ehrenwald, chief executive officer of the International Gemological Institute, told CBS News,"There's no gemstone that has the brillance, the scintillation, the fire the sparkle that a diamond brings to the eye."

Americans spend nearly $30 billion a year on diamonds. However, with the current state of the economy, some couples are opting for non-diamonds and diamond lookalikes, rather than the $5.5 billion dollars expected to be spent on engagement rings in 2010. Instead, Americans will spend $385 million on non-traditional engagement rings, with sapphires (according to JCK Magazine) at the top of the list.

Millie Martini Bratten, editor in chief of Brides magazine, said, "As individual as people are there are that many types of rings available today."

When Beth Dicastro got engaged, she opted for something other than a diamond.

Her 10-carat stone is made of a substance called moissanite.

Jon Rapasky, Dicastro's finance, said, "I can get her a bigger size ring for a fraction of the cost."

Dicastro and Rapasky plan to use the money they saved on a ring to pay for their wedding.

Looking at her ring, Dicastro said, "It absolutely takes my breath away."

Koeppen added that experts say the three-month salary rule of thumb for buying an engagement ring is a thing of the past -- it all comes down to what you can afford.

When asked to pick the real diamond, Smith picked the moissanite option.

And he's not the only one to pick one of the non-diamond options: Koeppen asked women on the streets of New York the same question and 38 percent of them chose one of the alternative rings.