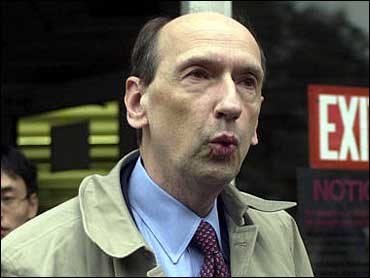 As the trial of Andrea Yates continues, the efforts of the prosecution to poke holes in the testimony of defense expert Dr. Phillip Resnick could be key. Commentary by CBSNews.com Legal Analyst Andrew Cohen

I don't know how you spent your weekend but I have a pretty good idea how prosecutors in the Andrea Yates' trial spent theirs.

They spent a good part of the past 48 hours pouring over Friday's direct testimony of defense expert Phillip Resnick, a recognized expert in child killings, who told jurors just before their weekend break that in his professional opinion the defendant fit the definition of "legally insane" when she killed her five children last June.

Specifically, Resnick told jurors that not only did Yates not know right from wrong when she systematically drowned her kids in their own bathtub, she actually thought she was doing the right thing. Two right things to be exact.

Resnick told the panel that Yates thought that by killing her children she would guarantee them a future in heaven while at the same time ensuring that the Devil inside her would be executed when she was similarly done in by the State of Texas. Resnick also characterized Yates' actions as having a noble, protective quality to them -- some sort of natural quality -- since she killed thinking she would be saving her children at her own expense.

Aside from being striking and disturbing and not a little controversial, Resnick's conclusions are absolutely critical to the Yates defense and to the trial itself since the question of whether Yates knew right from wrong last June 20th is essentially the only disputed issue of the whole case.

Remember, Yates confessed to killing her kids and even prosecutors concede that she was mentally ill back then. If jurors believe Resnick above any other expert, then, Yates has a good chance to be acquitted by reason of insanity despite the seething disgust jurors showed toward her during the first week of the trial when photos and a video of the slain children were shown in court.

So you can understand why the State needs to come back hard at what Resnick told jurors on Friday. Prosecutors will need to promptly attack his credentials and his conclusions, his analysis and his presentation. Even before the State brings on its own medical experts later in the week, it will have to drop Resnick down a notch or two if that's possible. Which is why I'd be willing to bet a Texas-sized steak that lead prosecutor Joe Owmby huddled this past weekend with his own experts to determine how Resnick could be attacked and in what manner. You never get a second chance to make a first impression with a witness like Resnick. And there are no weekends for lawyers in a jury trial because there are no second chances in a jury trial, or at least no second chances on which any lawyer wants to count.

First, by late Friday afternoon I suspect, prosecutors and the State's experts got a transcript of Resnick's direct testimony. They all probably read it and highlighted it Friday night and then got together for a strategy session on Saturday. Is there something about Resnick's qualifications that prosecutors would want to highlight for jurors? Did Resnick go too far? Did he render a conclusion that simply isn't supported by any factual basis? Is there some way to get Resnick to offer an opinion that the State's experts can pick up on later in the week? Any way to make him look bad or at least a little shaky?

Once the strategies were discussed, I reckon the State wrote down a few more questions to ask during its cross-examination. For example, can't you just see Owmby asking Resnick in more or less these exact words: "Are you really trying to tell this jury, sir, that holding your child's head under water until that child stops breathing is a noble act? And just precisely how is it protective to a child to kill that child?" You can easily imagine how Resnick's testimony, however grounded in law or fact it may be, would give valuable fodder for the State to make him an unpopular witness for jurors. Texas isn't exactly known for its embrace of new and controversial theories within the criminal justice system.

The bad news for the State is that jurors have had the whole weekend to dwell on what Resnick said - and the way he said it, without such certainly and aplomb - without a contrary view being offered during cross-examination. Will his conclusions set like concrete within the jurors' minds between Friday and Monday? One side in a trial positively hates it when the other side's best witness gets to testify without cross-examination before a weekend break for that very reason. And in many cases judges will require at least a little cross-examination to "even out the score" a bit before the weekend.

But the good news for the State is that prosecutors should be as prepared as they can ever hope to be when court resumes Monday with Resnick on the stand and in the line of fire. And if the State doesn't offer its best possible assault on Resnick's reputation and his analysis - if it can't shake his conclusions - it will say something about what ought to happen to Andrea Yates. Something the State probably doesn't want to hear.