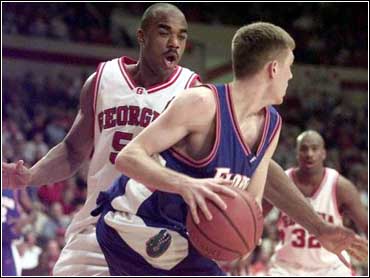 Even though ninth-ranked Florida was lodged in a 31-31 tie at halftime, Mike Miller wasn't too concerned.

"We had great looks," he said of the first 20 minutes. "We were wide open. We just weren't making shots. I knew they would start falling."

Miller keyed a strong second half, scoring 12 of his 25 points during a seven-minute stretch when the Gators took control and went on to beat Georgia 90-68 Wednesday night.

"I knew we were going to pick up the shooting," Miller said. "My shot was feeling pretty good."

Miller ended his scoring spree with two free throws after Georgia coach Jim Harrick was hit with a technical foul with 7:07 to play. Miller's free throws stretched the lead to 69-55, coming after Donnell Harvey had completed a three-point play.

The Gators made the one trip down the floor worth seven points when Udonis Haslem scored moments later as Florida retained possession.

Less than a minute after Florida's seven-point trip, Harrick was ejected with his second technical with 6:09 to play. Brett Nelson hit one of the two free throws to make it 76-57.

Harrick said he had been complaining about moving screens by the Gators all night.

"I was just trying to point that out at them (officials)," he said.

"It's not something you really want to happen," Harrick said of the technicals. "I'm not sure I've ever seen one whethe guy was sitting down. When a guy's just jabbering and trying to get a point across, you don't have to do that."

Harrick was sitting when he was hit with the second technical.

But, he said, "that made no difference in the game."

Georgia bolted to an 8-2 lead before the Gators began chipping away in a first half that saw 10 lead changes. Matt Bonner hit an 18-footer as time expired to draw Florida into a tie at 31.

Georgia trailed only once in the early part of the second half, with Layne's basket making it 43-41 before Miller took control and put the Gators in command.