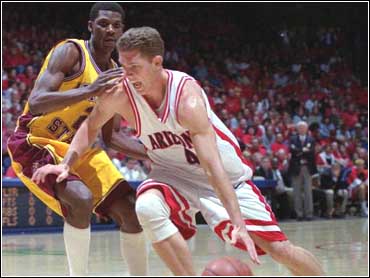 The day was to honor Arizona coach Lute Olson, but Arizona State almost spoiled the party.

Fourth-ranked Arizona, which will have to do without 7-foot-1 center Loren Woods for at least the rest of the regular season, nearly blew a 21-point first-half lead Saturday but pulled away in the last 3 1/2 minutes to beat Arizona State 89-82.

Gilbert Arenas scored 29 and Luke Walton 23, career bests for the two freshmen, as the Wildcats (24-4, 13-1 Pac-10) defeated the Sun Devils for the 10th consecutive time. Michael Wright had 16 points and 14 rebounds, including two crucial offensive rebounds in the final minutes.

With Woods out with a back injury and Richard Jefferson a week away from returning from a broken foot, the resilient young Wildcats came through again in a tough situation.

"We've had plenty of challenges, more than we need probably," Olson said. "But I said all along that we have good people in this program and we have great competitors in this program. Somebody is ready to step in and do the job for us."

Arizona State rallied to cut the lead to 73-70 with 3:27 to play, but the Wildcats pulled it out.

After the game, the Wildcats held a ceremony to name the McKale Center playing surface Olson Court.

He said he would preferred the honor came after his retirement, but athletic director Jim Livengood said that wasn't an option.

"It will be a strange feeling," Olson said, "but it's much appreciated."

Alton Mason scored all of his career-high 18 points in the last 6:10 of the game for the Sun Devils (16-10, 8-6), who had won four in a row. His layup after an Arizona turnover cut the lead to 73-70 with 3:27 to play. But the Sun Devils went cold from the field after that and Wrght took over the boards.

Eddie House, the Pac-10's leading scorer, had a miserable game and was on the bench in foul trouble during ASU's late surge. House, who will finish his college career never having beaten Arizona, was 3-for-15 from the field for seven points, nearly 17 below his average. In Arizona State's 82-55 home loss to the Wildcats in January, House was 4-for-14 and scored eight points.

"I had a bad game but I can't dwell on it," House said. "I played hard but my shots just weren't falling today. I am more upset by the loss than by how I played."

Most of the night, Arizona went man-to-man against House, when Arenas usually getting the assignment.

"I watched a lot of film on him to see what he does," Arenas said. "I wanted to see how he moved and then I tried to stay with him."

Justin Wessel, who replaced Woods in the starting lineup, sank a 10-footer to give the Wildcats their biggest lead of the half 35-14. But Arizona State scored the last nine points of the half, capped by a 3-pointer by Kyle Dodd at the buzzer to make it 35-23.

Arizona State cut the lead to seven twice early in the second half. The Wildcats moved out to a 17-point lead, but the Sun Devils managed the final rally to cut it to three.

Wright's rebound basket boosted the lead to 75-70. With 1:02 to play and Arizona leading 81-74, Walton missed two free throws, but Wright got the rebound, was fouled and sank two free throws to make it 83-74 with 59.1 seconds to play.

House's final shot before fouling out was a 3-point air-ball.

Woods, who has missed two games, will be out at least another two weeks with a compression injury to his lower back. The earliest he could return would be the first game of the NCAA tournament.