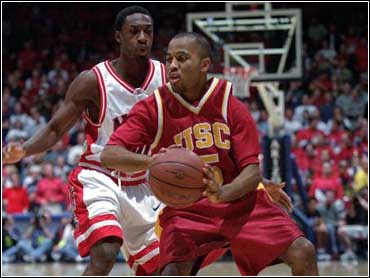 Revenge was sweet, but a little tougher than Arizona would have preferred.

Jason Gardner snapped out of a three-week shooting slump to score 15 of his 19 points in the second half Thursday night as the fourth-ranked Wildcats pulled out a 92-85 victory over Southern California to avenge their lone Pac-10 loss of the season.

"The team felt that we let them outplay us last time," Wright said. "They played a good basketball game. We wanted to come out here and get them back."

Brian Scalabrine, who scored a career-high 27 points against Arizona the first time, bettered that with 28 this time despite playing most of the game in foul trouble. Jeff Trepagnier had 20 points and 13 rebounds for USC (13-10, 6-5) but missed a 3-pointer that would have tied the game with 24 seconds to play.

Brandon Granville had 21 points for USC, 15 in the first half, and 11 assists.

Gardner, whose underhanded layup in traffic gave Arizona an 88-82 lead with 1:16 remaining, clinched it with two free throws that made it 90-85 with 17 seconds to play. Wright punctuated the victory with a breakaway stuff with a second to go.

All five Arizona starters scored in double figures. Loren Woods, bothered by a sore back, had 17 points and eight rebounds and Luke Walton matched his career high with 13 points. For the first time in Pac-10 play, Woods didn't block a shot.

USC lost its fourth in a row and fifth in seven games, but not before seriously threatening Arizona's 26-game Pac-10 homecourt winning streak.

Trojans coach Henry Bibby said. "The guys hung in there and fought. We had a chance. I can't ask for anymore from my guys. We were just a little bit short here and there."

The Wildcats scored the first basket of the game, then trailed the rest of the half. Scalabrine scored 13 points in the first 8@1/2 minutes, mostly on layups, and USC built a 27-18 lead on Trepagnier's 3-pointer with 10:33 left in the half.

Trailing 43-39 at halftime, Arizona scored the first nine points of the second half on 3-pointers by Gardner, Arenas and Walton to go up 48-43, but the Trojans didn't fold.

Scalabrine stole Walton's pass inside to give USC a chance to tie it, but Trepagnier's 3-pointer was just long.

"The real difference is that we started to play defense with some emotion," Arizona coach Lute Olson said. "I thought we were awful in that area in the first half."

Gardner, 7-for-41 from the field in his previous five games, was 3-for-5 in the second half and 6-for-13 for the game. He also had eight rebounds and six assists. He said he felt good when his first jumper went in.

"That was a big confidence boost for me," Gardner said. "I think I shot it a lot better after that."

Gardner was 3-for-7 from 3-point range to avoid a threat from fellow freshman Arenas.

"I told him before the game if he didn't hit three 3s, I would sock him in the face," Arenas said.