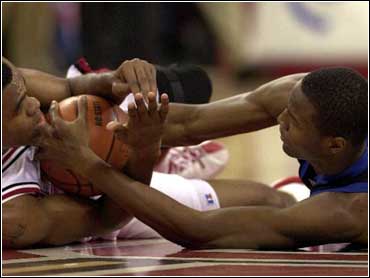 Growing up in the Midwest, Chris Carrawell dreamed of not playing in the Big Ten but of winning an Atlantic Coast Conference championship. Now, the Duke senior has four titles.

Carrawell scored 22 points, including several key baskets down the stretch, as No. 3 Duke clinched at least a share of a fourth straight ACC crown with a 71-66 win over North Carolina State on Saturday.

"Coming from St. Louis, I never would have imagined winning four straight titles in the ACC," said Carrawell, who added six rebounds and five assists. "When I go home all the guys will ask me how the ACC is and I will keep telling them its the best basketball in the country.

"For me to be a winner in this league, I am proud of that."

The Blue Devils (21-3, 12-1 ACC) were held to 19 points below their scoring average. Duke also had to hold off a 16-5 rally by the Wolfpack over the final 4 1/2 minutes, before extending its ACC-record road winning streak to 18 straight.

The Blue Devils won the ACC crown despite losing three players early to the NBA, plus the graduation of 3-point ace Trajan Langdon and the transfer of projected starting center Chris Burgess.

"Even though it seemed like the walls of the empire were falling, we knew we had three pillars and a coach who is good to lead this program," said Shane Battier, referring to himself, Carrawell, junior Nate James and coach Mike Krzyzewski.

"Outside of Durham and this program I don't think you would have found too many people who thought Duke would have been 12-1 and have a share of the ACC title right nw," added Battier, who had 15 points. "But this is a testament to our coaches and the whole program."

The Wolfpack (15-9, 5-8) lost its fifth straight after a 15-4 start and is in danger of missing the NCAA tournament. Anthony Grundy led N.C. State with 26 points.

The first meeting at Durham a month ago, a 92-88 overtime win by the Blue Devils, produced 16 lead changes and 15 ties, but Duke never trailed in this one.

"Our guys were good, especially our veterans," Krzyzewski said. "Carrawell came up with some big plays."

Duke extended its six-point halftime lead to 53-37 with 11:47 left as the Wolfpack started 1-for-9 from the field in the second half and the Blue Devils got inspired play from freshmen Jason Williams and Carlos Boozer.

Williams, saddled with foul trouble in the first half, hit a 3-pointer and made a layup, while Boozer had a three-point play and another layup as the Blue Devils built their lead to double digits.

When N.C. State closed to 57-48 with 8:11 left, Carrawell took over, hitting a 3-pointer and a turnaround jumper as Duke made four straight shots and turned back the Wolfpack rally over the final minutes.

"I love the fact that he wants to ball," Krzyzewski said of Carrawell.

Wolfpack coach Herb Sendek didn't hesitate when asked who made the difference for Duke.

"He is one of those special guys," Sendek said of Carrawell, who had 30 against the Wolfpack in the first meeting. "As complicated as we want to make basketball sometimes, there are those special individuals that just step up and make a great difference. He has great experience and great talent."

The Wolfpack started 1-for-10 from the field to fall into an 11-point hole early.

"We came at them and that was important," Carrawell said. "Anytime you go on the road you've got to get off to an early jump. That was the key because they had to keep fighting to get over the hump. Every time they made a run it seemed like we made a basket."

Duke made its first four shots to quiet the crowd of 19,623, but Williams picked up two fouls in the opening four minutes. With Williams playing cautious or on the bench, the Blue Devils' offense became stagnant and their defense was forced into an uncharacteristic zone defense for a possession or two.