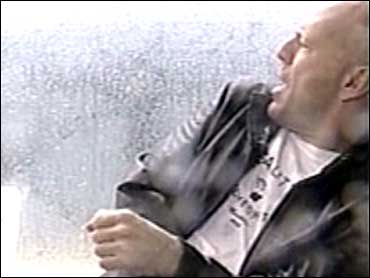 Coach Denny Crum grabbed a pen, wiped his brow and dissected the stat sheet that came down to one row of numbers, the ones that belonged to Kenyon Martin.

Martin scored 24 points, had 12 rebounds and scored Cincinnati's biggest baskets throughout as the third-ranked Bearcats got up big and held on for a ragged 68-59 victory over Louisville on Sunday.

Cincinnati (26-2, 14-0 Conference USA) once again led most of the way against a team it has beaten seven straight times. Louisville (17-10, 8-6) couldn't stop Martin in the first half or in the closing minutes.

"If it wasn't for Kenyon Martin, we might have gotten the upset," Crum said. "He just dominated both ends tonight, really."

Martin had 14 points and 10 rebounds in the first half, when Cincinnati went ahead by 18 points. After Louisville cut it to nine points with 3:48 left, Martin scored Cincinnati's final eight points.

He hit had consecutive three-point plays on power moves to the basket and scored inside again to prevent Louisville from getting a shot at the upset.

"We were struggling, so I decided to take things upon me," Martin said. "I've been here so long, it's on me to do that."

Nate Johnson led Louisville with 17 points and Quintin Bailey had 16.

The first half was a horror for Louisville, which fell behind 33-16, its biggest halftime deficit and its fewest first-half points of the season. The Cardinals shot only 28 percent, had 12 turnovers and barely outscored Martin as a team.

"Well, this was a tough game," Crum said. "I felt for us to have a chance to win, we'd have to have a good first half."

Instead, it set up a plot similar to their game Jan. 27 in Louisville, when the Bearcats got up by 18 points in the first half and never let the Cardinals get closer than seven. DerMarr Johnson was the leader in that game, scoring 21 in the first half while hittng his first eight shots.

Johnson sat out Cincinnati's last game as an NCAA suspension for accepting money from an AAU coach to help pay his tuition last year at a prep school. His biggest contribution Sunday was on defense, helping the Bearcats contain Louisville leading scorer Marques Maybin. He blocked Maybin's first two shots, setting the tone for Louisville's lousy first half.

"We quit playing," said Huggins, who was as unhappy after the game as he's been all season. "Our guys are the only ones who don't understand that he (Crum) is a great coach and he's got great players. They think they're going to roll over in the second half, I guess. We did in the second half that was atrocious."

Both teams came out cold, making only 5-of-23 combined. Cincinnati took control with a 12-point run that included a couple of fastbreak baskets by Johnson.

Cincinnati pulled into its commanding lead even though it shot only 39 percent in the first half. Its defense was the difference.

The Bearcats' main worry was Maybin, who was coming off a career-high 28 points in a victory over Saint Louis and had average 20 points in his last six games.

Maybin got off only two shots in the earlier game in Louisville, making them both for four points. He once again had trouble getting open shots and finished with nine points on 3-of-10 shooting.

A 9-4 spurt capped by Maybin's driving layup cut the lead to 60-51 with 3:48 left, but Martin made consecutive three-point plays off power moves to the basket, abruptly ending the Cardinals' comeback.