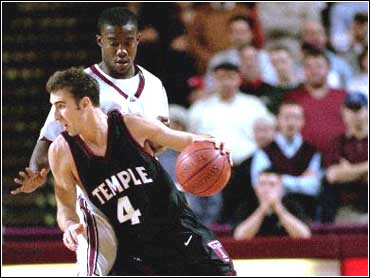 Neither Temple nor Massachusetts shot very well. It's what happened to all those missed shots that made the difference.

No. 21 Temple harassed the Minutemen into bad shots and then dominated the boards, outrebounding UMass 48-20 Tuesday night en route to a 75-48 victory.

"When you're not rebounding the ball and getting second chances, it's tough," said UMass coach Bruiser Flint, whose team shot just 38 percent. "When you start getting down against those guys, it's tough because of the way they play."

Mark Karcher scored 17 points and Keaton Sanders had nine rebounds for Temple (15-4, 8-1 Atlantic 10), which earned its sixth consecutive victory and ninth in 10 games.

Monty Mack scored 14 points and had a team-leading four rebounds as UMass (11-9, 5-3) had its lowest scoring output of the season and just their second loss in eight games. It was their worst loss ever at the Mullins Center, which opened in 1993.

"Bruiser right now doesn't have the talent that they once had," said Temple coach John Chaney, who had only won in the building once before. "Those things go around and around."

Temple shot just 46 percent, but its top-ranked defense, which has allowed opponents 53.5 points per game, gave up more than 47 points for the first time in five games and just barely.

The Owls' defense was so dominant that they finished with as many rebounds 48 as UMass had points. Temple had a 20-16 rebounding edge under its own basket and a 28-4 edge on the defensive boards.

and a 20-8 advantage on points in the paint.

"When we establish the floor with our defense, our offense comes around," Karcher sai.

Temple led 23-19 before going on a 20-2 run that put the game away early. The Owls held UMass scoreless for 7:32 before Micah Brand made a layup with four seconds left in the first half.

The Minutemen then went scoreless for the first 3:55 of the second half. By that time, the Owls led 43-21, and it was never close again.

Mack and Temple's Quincy Wadley, the Atlantic 10's co-players of the week last week, each had just one basket for most of the first half. But Wadley added two in the final two minutes of the half and a 3-pointer for the first basket of the second half to finish with nine points.

"We tried to get out (in front of) Mack," Karcher said. "He's their shooter and we didn't want to let him get a good look at the basket."