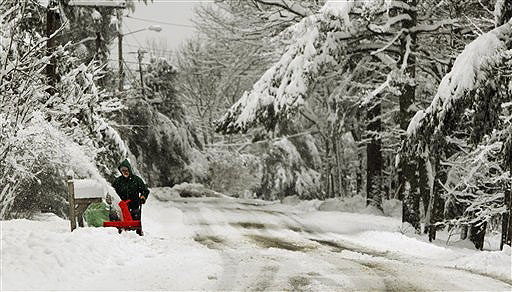 Jason Williams and Carlos Boozer dominated the first half for Duke. Shane Battier was unstoppable in the second. Georgia Tech never had a chance.

Williams and Boozer combined for 34 points before the break, then turned over the ball to Battier. He scored 30 of his 34 points in the second half as the No. 2 Blue Devils cruised past Georgia Tech 98-77 Saturday.

"Not that they need my approval, but I've got a lot of respect for that Duke team," said Paul Hewitt, Tech's first-year coach. "Think about what they go through every single game, especially on the road. People just load up and give them their best shot."

Georgia Tech, which had beaten a couple of Top 10 teams this season, didn't have nearly enough weapons to beat the Blue Devils (17-1, 5-0 Atlantic Coast Conference).

Duke built a commanding 52-33 lead by halftime against Tech, with Williams accounting for 18 points and Boozer 16.

Battier, held to four points before the break, took over in the final 20 minutes. He scored 20 straight points for Duke, nearly doubling up the Yellow Jackets during the remarkable five-minute stretch.

"I've always considered myself a complete player: offense, defense, transition," Battier said. "I really can't remember the second half too well. ... It was like I was on the outside looking in. Don't ask me how to get there, because I have no idea."

Battier also had five blocks, continually swatting away shots by a Tech team that was hopelessly overmatched after 6-foot-11 center Alvin Jones picked up four fouls in the first half, including a technical.

"I feel like I let the team down," said Jones, who played only 14 minutes. "I've already apologized to them and I'm going to write a letter of apoogy. I feel bad about what happened."

The Yellow Jackets (10-7, 2-4) had consecutive victories over Virginia and Wake Forest, both ranked in the Top 10 at the time. But Duke is at another level, coming in with an average winning margin of 25.7 points.

Williams stretched the Tech defense early by making three straight 3-pointers. The Blue Devils pulled away in the final 10 minutes of the first half, outscoring the Yellow Jackets 29-14.

Georgia Tech shot only 27 percent (9-of-34) in the opening half, its frustration summed up by a sequence with about five minutes remaining.

Jones, the only player capable of matching up inside with the 6-8 Battier and 270-pound Boozer, thought he was whacked on the arm on a missed shot in the Duke lane. At the other end, Jones was called for his third foul while defending a shot by Boozer, then picked up his fourth a technical for complaining about the call.

Jones went to the bench for the rest of the half and much of the second, effectively ending his team's chances.

Instead, the Blue Devils pounced when Jones picked up the technical.

"We really wanted to pounce on them then," Battier said. "I gathered the guys together and said, 'This is the time."'

As proof of his importance, Jones still led the Yellow Jackets with 13 points despite the lack of playing time.

Another key Tech reserve, freshman Halston Lane, also picked up four fouls in the first half while trying to guard the taller, quicker Blue Devils. One was on Williams after he made a steal and was going in for a layup.

Duke went to the free-throw line 20 times in the opening half, making 16. Boozer was continually fouled underneath, and did most of his scoring at the line, hitting 10-of-12.

Battier hit 11-of-14 shots in the second half, including four 3-pointers, to equal his career high for points, set last season against Wake Forest. Williams and Boozer each finished with 24 points.

Duke has won nine straight over Georgia Tech only three decided by fewer than 10 points.

"Obviously, we've got a good team," Duke coach Mike Krzyzewski said. "No one is dominant, but we should be one of the contenders."