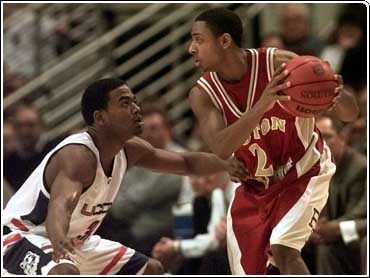 Inside or out, Boston College had few answers for energized Connecticut.

The 13th-ranked Huskies rebounded from their worst loss of the season 85-66 at No. 6 Michigan State with one of their best offensive efforts on Wednesday night. UConn matched a season-best with nine 3-pointers and beat the Eagles 87-58.

"We knew there was the possibility after their last game that they would come home and play with a lot of intensity," BC coach Al Skinner said after his team's 10th straight loss.

The Eagles were pounded from the perimeter. Albert Mouring was 5-for-5 from 3-point range and scored a career-high 23 points. Backcourtmate Khalid El-Amin had three 3-pointers and 21 points as the Huskies beat the Eagles for the 22nd straight time.

UConn (17-5, 6-3 Big East) also dominated in the post, despite the absence of injured starting center Jake Voskuhl. Kevin Freeman and Edmund Saunders combined for 17 rebounds and 25 points and the Huskies outrebounded the Eagles 47-35.

El-Amin said when he and Mouring are both on, it can be tough on any team.

"The defense can't really just pressure one person or key on me or key on him," El-Amin said. "We just have to stay consistent, and if we do that we'll be OK."

The 6-foot-11 Voskuhl sprained his right ankle against Michigan State on Saturday. Souleymane Wane made his first start at center and finished with two points, four rebounds and a block.

The game had four lead changes in the first nine minutes. The Eagles (9-14, 1-9) had an 18-15 lead with 8:34 left in the half until the Huskies' perimeter shooting broke the game open.

UConn coach Jim Calhoun said the Huskies played a bit too cautious in the opening minutes.

"We're much better whn we just play. When we get the game accelerated," Calhoun said.

The game also marked the return of reserve guard Tony Robertson, whom Calhoun suspended, along with Doug Wrenn for an off-campus incident last month. Police were investigating whether the freshmen improperly received merchandise from a Hartford-area clothing store, and earlier Wednesday said no criminal charges were warranted.

Calhoun lifted the suspensions Tuesday, opting to play Robertson, while Wrenn did not dress but sat on the bench. Robertson played 20 minutes and finished with two points and three rebounds.

"It's good to be back on the court, back with my team and helping us win some games," Robertson said.