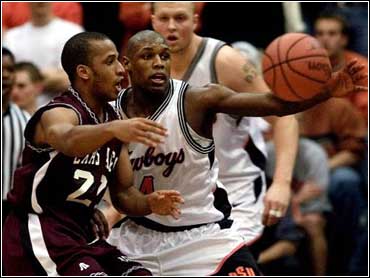 Oklahoma State had control of things early on against Texas A&Mand, for a change, kept control the rest of the way.

The No. 13 Cowboys have had a tendency to play listlessly at times or get complacent after building big leads. But they kept their focus throughout the game Saturday in beating Texas A&M 87-55.

"I thought they played with a lot of fire today, and that's at times what has kept us from not playing good basketball games," coach Eddie Sutton said. "That's the way you ought to play all the time."

There were period of sloppy play, but that's to be expected when a team leads by 40, as the Cowboys did three times in the second half. But they were inspired enough to easily avenge a 64-59 loss to Texas A&M two weeks ago.

"I think our ballclub came out and played the way we should have played down there," said Glendon Alexander, who tied a career high with 25 points. "We can't go back over that game. We took an `L' and it was on our minds. Today we just came out and jumped on 'em from the start."

The Cowboys led 12-2 after four minutes, 24-6 after seven minutes and 42-14 with six minutes remaining before halftime.

"We just wanted to prove a point, send a message to A&M, and I think we did," Alexander said.

Aaron Jack had 14 points and 10 rebounds for the Aggies (6-14, 2-7), who were held to 34 percent shooting and lost their fourth straight since beating Oklahoma State on Jan. 22.

"That's what Top 20 teams do, they come back on their home flor," A&M coach Melvin Watkins said. "They were surely on a mission. They came out and I think did all the things they need to do."

Alexander made two 3-pointers while scoring eight of Oklahoma State's first 12 points. Then Mason took over, hitting three straight 3s and three of four free throws in less than three minutes, giving the Cowboys a 26-8 lead.

Alexander and Mason scored all the points in an 11-2 run that made the score 46-18. The Aggies got no closer than 22 the rest of the way as Oklahoma State kept up the intensity.

"I think the guys were so disappointed in the way we played down at A&M," said Sutton, who got his 650th victory. "I think if we play that game 20 times, we'd win 19 times. I think they realized they blew a game that at this point we could be 8-0 (in the league) and having everybody maybe chasing us."

"I told them you can't ever look back. That's a loser's attitude. But you learn from mistakes, you learn from losses. There's no doubt, in our practice sessions, they were focused in on this game."

All but one Oklahoma State player took the court with freshly shaven heads. The only player who abstained was freshman Andre Williams, who had four blocks in 15 minutes.

"It's all about unity," said Joe Adkins, who had 10 points, eight rebounds and seven assists. "We feel that we have to become more of a team and be more together."