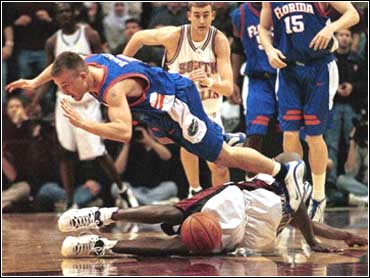 About the only one who didn't know Teddy Dupay's importance to No. 12 Florida on Wednesday night was Teddy Dupay.

Dupay had a season-high 20 points, including five 3-pointers that lifted the Gators over South Carolina 86-82.

Four of Dupay's long shots regained leads for the Gators, and his four-point play put them ahead for good.

"You're telling me that and that's the first time I know that," said Dupay. "I almost never look at the score during the game."

If he had, he'd have seen his big night. The most critical moment for the 5-foot-10 sophomore may have come after Jamel Bradley's 3-pointer got the Gamecocks (9-12, 1-7 Southeastern Conference) all the way back from an eight-point deficit to lead 57-56.

Dupay put up an off-balance shot that swished through the net as Bradley undercut him. After Dupay's foul shot, Florida (16-4, 5-2) had a lead it would not surrender on the way to its third straight SEC road victory.

Dupay wasn't finished. He followed with an uncontested layup and then a nifty behind-the-back dribble and zip pass to an open Kenyan Weaks for a basket as Florida led 66-63.

"I don't even think about that," said Dupay, who passed his season high of 16 set in December against High Point. "If I had an open shot, I took it. If not, somebody else is going to be there."

And that was probably Weaks, who had gone seven games without breaking double figures before hitting for 22 against South Carolina. Weaks made four 3-pointers, most after Dupay had passed him the ball with defenders running at him.

"The one thing you can say about Teddy and Kenyan and most shooters is you make one or two early, you kind of get your rhythm going," Florida coach Bill Donovan said. "Very rarely do you see people go from start to finish with that type of range."

The Gamecocks again hung close with a top-rated club. But like three-point losses to Michigan State and Syracuse, a four-point defeat at Auburn and a 61-60 last-second home loss to Vanderbilt a week ago, they could not close things out.

Its two top scorers, guards Herbert Lee Davis and Chuck Eidson were a combined 2-of-17 for nine points. The Gamecocks have lost seven games by eight points or less against ranked teams.

"With Herbert it was some tough shots, with respect to Chuck Eidson, he's fatigued with all he has to do," South Carolina coach Eddie Fogler said.

Eidson, a 6-foot-7 freshman, has had to take over the point with a hand injury to starter Aaron Lucas, who is expected to miss at least two more games.

After trailing by 10 points with 45 seconds left, the Gamecocks closed to 84-80 on Bradley's 3-pointer and Antonio Grant's 3-point play.

"It felt great to finally contribute offensively," said Weaks, who had scored only 40 points his past seven games. "Hopefully, it generates some success for our basketball team."

Dupay hit four long-range shots in the first half, the first which came from well beyond NBA range.

Fogler said he was glad the game was called consistently tight, but thought it was "too close, in my opinion."

South Carolina's center, Tony Kitchings and Marius Petravicius, played only 28 minutes combined and both fouled out.

"It's tough for us to play with our two big men on the bench," Fogler said.