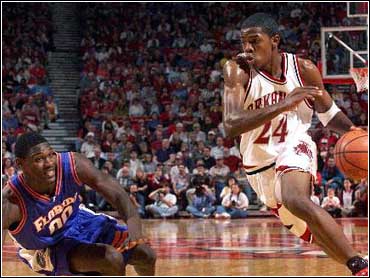 On Tuesday night, he showed the Razorbacks he's just as good from 15 feet. Weaks, 14-of-22 on 3-pointers against the Razorbacks the past two years, improved on that percentage by making 3-of-4. He also made four straight free throws two with 6:04 to play and two more with 5:50 left to give the No. 11 Gators some breathing room in their 80-71 victory.

Weaks has made 28 straight free throws this year and has only missed once in 44 attempts.

"We knew we couldn't win shooting 3s, although we shot 50 percent from beyond the arc," Florida coach Billy Donovan said. "Three-point misses lead to fast-break baskets and Arkansas is one of the best in the country at fast-break points."

Florida (19-5 overall, 8-3 Southeastern Conference) was in charge most of the way after overcoming Arkansas' 8-0 start. The Razorbacks (13-11, 5-6) finally got going from the outside on two 3-pointers from Charles Tatum and one from Brandon Davis, and Alonzo Lane had a dunk to close the margin to 65-59 with 6:19 to play.

Arkansas once again cut it to six on Joe Johnson's acrobatic leaner on the baseline with 1:50 left to make it 73-67. Mike Miller, who scored 19, hit both ends of the bonus with 1:44 left and Arkansas didn't get closer than eight after that.

During the first 27 minutes, Arkansas missed 17 of 23 3-point attempts in falling behind by 10. The Razorbacks finished 9-f-31 on 3-pointers.

Florida, which had been attempting 20 3-pointers a game, tried 13 against Arkansas and made seven.

"This is a big step for us," Miller said. "This win shows that we are building as a program because we were able to come in here and win."

The Gators led for the final 33 minutes, but early in the half, Johnson floated down the lane for a basket and Teddy Gipson hit from the corner as Arkansas cut the lead to four. Miller missed a 3-pointer, but the long rebound was grabbed by a teammate who gave Miller another chance from almost the same spot. He made this one and was fouled, completing a four-point play to give Florida a 47-39 lead. Udonis Haslem's tip-in pushed the lead back to 10.

Haslem and Weaks scored 13 each. Johnson led Arkansas with 15.

The Gators committed three turnovers in the first 2:12 and Arkansas built an 8-0 lead.

"I was proud our guys kept their composure when we got down 8-0," Donovan said.

Off the bench, Miller provided an immediate spark with a buzzer-beating 3-pointer and a drive down the lane that ended with a finger roll.

Florida grabbed the lead 14-13 when Blake Eddins' inbounds pass was deflected and Brett Nelson headed the other way for a 15-foot jumper. Weaks made 3-pointers from the right corner and then the left corner as the Gators went up 20-15. Arkansas got as close as one, but Justin Hamilton's fancy layup and Brent Wright's basket widened the lead and it was 37-30 at the half.