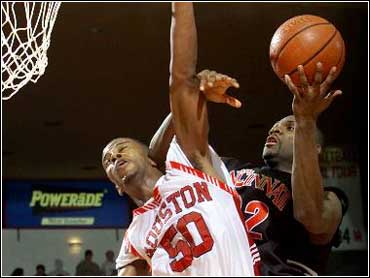 Houston just didn't have enough against No. 1 Cincinnati to repeat history.

Kenyon Martin had 26 points and 17 rebounds as Cincinnati held off a second-half charge by Houston for a 77-65 victory Thursday night that gave the Bearcats their fifth consecutive Conference USA championship and 16th straight victory.

The last time Houston played host to a No. 1 team was Jan. 20, 1968, in "the game of the century" against UCLA in the Astrodome before 52,693 fans. It was college basketball's first nationally televised regular season game and the Cougars won 71-69.

"We play harder in practice," Cincinnati coach Bob Huggins said. "If they don't play harder than that in practice, they know I'll run them until the puke. If you polled them what's going to happen tomorrow (in practice) they're probably more concerned than I am."

The Cougars got within seven points twice, the last time with 2:41 to play on a 3-pointer by Gee Gervin, who had 18 of his 26 points in the second half.

"We came out ready and intense tonight, but we were a little uptight," Gervin said. "I missed some easy shots in the first half that I know I knock down all day long."

The Bearcats led 46-28 at halftime but the Cougars started the second half with a 13-7 run as Gervin scored seven points. Houston made six of its first eight shots in the second half.

DerMarr Johnson had 19 points for the Bearcats, who have the nation's longest winning streak.

"Gee Gervin's what happned," Martin said. "He made a lot of big shots. A team gets down and someone steps up and we lost some intensity."

The Bearcats opened a 24-6 lead as Johnson hit consecutive 3-pointers and a fast-break layup for the game's first eight points. Cincinnati made its first five shots and at one point in the big run, Houston missed 12 consecutive shots on the way to shooting 28 percent in the first half.

"Our guys showed a lot of heart tonight," Cougars coach Clyde Drexler said. "We never quit and when you keep fighting good things can happen. The difference in the game was our poor shooting in the first half."