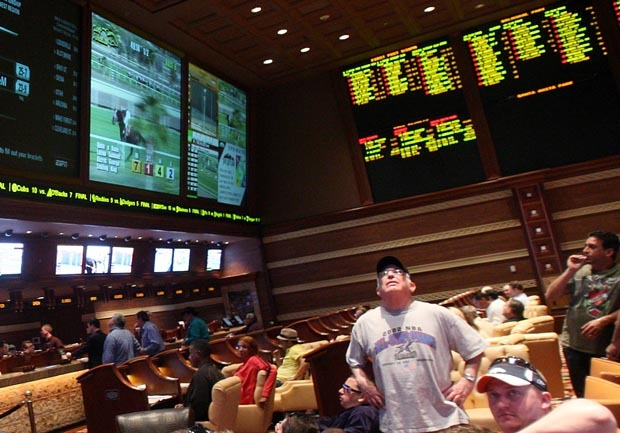 (CBS/AP) Las Vegas casinos think this weekend's NFL games will be the highest-scoring ever thanks to the league's replacement officials.

Oddsmakers say casinos are changing their expectations as interim referees add new variables to the game, changing its pace and the approaches taken by players and coaches.

Casinos haven't fully changed lines yet because there have been only two weeks of games and referees might adjust how they call games based on weekly feedback from the league. But oddsmaker Mike Colbert of Cantor Gaming says home teams will deserve an extra half-point in their favor if games are called all year the way they were officiated in Week 2.

"It's starting to concern us a bit," Colbert said. "(Officials) should have no influence on the total or the side."

Penalties were skewed in favor of home teams during the first two weeks this year, with visitors getting 55.1 percent of 419 penalties. Last year began in a similar fashion- visitors took 54.8 percent of 407 total penalties through the first two games — before evening out over the rest of the season. Penalties were relatively even between home and road teams for all of 2010 and 2011, and it's anybody's guess how this year's penalties will split.

Sports books make money by encouraging balanced betting action; they get it by using point spreads to account for the advantage one team has over another. In Week 2, home teams went 11-4-1 after going 8-8 in Week 1.

NFL teams generally get a 3-point edge in sports books just for playing at home. An extra half-point added to that would be the equivalent of a team having a superstar receiver or running back on the field or an opponent missing its star because of injury, gambling expert RJ Bell of Pregame.com said.

"That's a strong statement that the people are really considering this to be a legitimate phenomenon," Bell said. "When you're taking hundreds of thousands of dollars per game, those half-points are really meaningful."

In the two weeks leading up to the Super Bowl earlier this year, oddsmakers said Patriots tight end Rob Gronkowski would shift the line a half-point depending on whether he appeared in the game. He played but caught only two passes in the loss to the Giants.

Public perception makes a big difference in a sports betting world built on complex math and opinion markets — even if popular opinions don't entirely match what's happening on the field.

Casinos expect an average of 46.1 points scored per game for Week 3 — the highest projected total ever for Vegas casinos, Bell said.

Bell said the jump can't just be another sign of a pass-happy league with rules designed to foster offense.

"What else has changed other than the referees," he said.

SportsBettingOnline.ag, a Costa Rica company that takes bets online, is taking referee bets directly to fans, allowing them to wager on different kinds of penalties league-wide, including the number of pass interference calls, how long games will last and whether home teams will take fewer penalties than visitors. Online sports gambling is illegal in the United States, and such bets wouldn't likely fly in Las Vegas.

Colbert said Cantor plans to allow bettors to wager for the first time ever on total points for the entire league. The over/under line was set to open Thursday morning at 732.5 points, an average of 45.8 points per game.

Colbert said that while it's high, it's lower than the totals of each of 16 games added up, in part because he thinks some casinos are overreacting to the referees and inflated their numbers.

But he said that might not matter to bettors, who notoriously love high scores.

"My gut instinct is they'll bet over," he said.

While the replacement refs could influence cash bets in Vegas, money is an issue in the ongoing lockout.

As Jeff Glor reported Thursdayon "CBS This Morning," the divide between the two sides is most significant over pension plans. The officials want to keep them whereas the NFL wants to shift to 401(k)s. Salaries are also an issue at hand, as officials, who earn an average of $149,000 a year, want more. But the increases being requested amount to .17 percent of the league's annual revenue -- $9.3 billion.

Don Banks, senior writer for Sports Illustrated said: "It falls under the heading chump change for the NFL. It's really about control and I think the league feels like they want to make sure they maintain control over their refs. The pension issue is important, but I think this deal could get done with very little financial strain for the NFL. It's kind of remarkable that it's gotten this far."

Asked if either side overplayed their hand in this case, Banks said, "I think to a degree they both did."