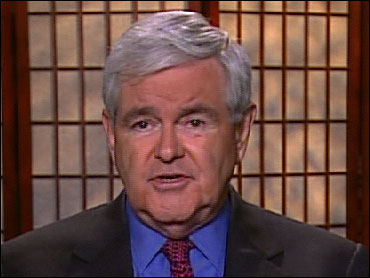 Newt Gingrich says Sarah Palin should simply be herself in order to win her vice presidential debate Thursday night with Joe Biden.

"She's not gonna out-Biden Biden. He went to the Senate when she was in the second grade. He is a Washington insider. He can answer all the 'gotcha' questions from the news media. He knows all the trivia, but he's never prepared a budget. Nobody's gonna ask her tonight, 'What was it like to prepare a state budget for the state of Alaska?' and then ask Sen. Biden, 'What was your executive experience like?, to which the answer is 'zero.'

"So, I think it will be very much a Washington insider situation. She's not gonna win by pretending to be a student who has studied Washington. She will win if she relaxes and is the person I think she is, which is a reformer and outsider, a populist, and a genuine conservative."

Rodriguez also questioned Gingrich about revised bailout plan passed by the Senate Wednesday night. Does he think there are enough changes in it fro the version the House rejected to put it over the top there?

"Probably," Gingrich replied. "I think the things they did, particularly the changes that the Securities and Exchange Commission announced the day before yesterday on accounting, the steps they're taking in this bill on tax policy, the fact that it has the energy extenders, which I discuss at length in my (new) book and which we discuss in our new movie, 'We Have the Power," which just came out last Saturday -- I think those are all good things. But I want to say, while I support passing this, I think it is a terrible process. I think (Treasury) Sec. (Henry) Paulson ought to be replaced. I think this has been a very badly handled problem and I think the American people should be in a rage, frankly, as much at predatory politicians and predatory government as at predatory bankers and predatory Wall Street."

The title of Gingrich's latest book, on shelves for just over a week, says it all as far as its assertions go, "Drill Here, Drill Now, Pay Less: A Handbook for Slashing Gas Prices and Solving Our Energy Crisis."

Rodriguez pointed out that Democrats would probably say drilling would hurt the environment and it would be years before we see the benefits, and drilling wouldn't result in relief from nation's reliance on foreign oil, anyhow.

"They're just wrong," Gingrich said. "I just met with two of the leading natural gas companies in Oklahoma City. We have over 120 years' supply of natural gas if we drill for it right now. We have three times as much oil in the oil shales of the Rocky Mountains as there is in Saudi Arabia. We have more coal than there is in any other country in the world. We have enormous resources. We know where there are billions of barrels of oil. The U.S. Geological survey just increased the estimate for the Bakken formation in North Dakota and Montana by 25 fold. Not 25 percent, but 2,500 percent.

"The fact is, if we didn't have so much leftwing litigation, so much leftwing regulation, we ought to be able to drill. We won the entire second world war in three years and eight months. The entire war. We beat Nazi Germany, fascist Italy and Japan in three years and eight months, and now we're told it takes ten years to drill? That tells you about government, not about drilling."