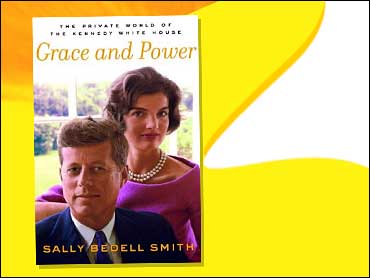 It has been more than 40 years since John F. Kennedy was president, but many Americans are still infatuated with the story of Camelot.

In the new book "Grace and Power," author Sally Bedell Smith provides new information about the private world of the president and Jacqueline Kennedy during their White House years.

Bedell Smith tells The Early Show co-anchor Harry Smith that for her book she spoke with more than 100 people connected to the Kennedy administration.

She says, "That included cabinet officers, West Wing advisers, close friends and family. So it was a very good cross-section of people who had intimate knowledge of what went on inside the Kennedy White House."

And among those people were a few who had not spoken about their experiences before. William Manchester, who wrote the intimate and authoritative book, "Death of a President," published not long after Kennedy's assassination, is one of them.

Bedell Smith notes, "Jackie contacted him and asked him to write it. He wrote a magnificent book. Wonderful historian. At the time, however, Jackie asked him to remove certain quotations, certain scenes that she thought were too personal. She was really at that moment involved in preserving a legacy.

"The papers had been sealed for 40 years. And I went to interview him, and I talked to him about what my book was. He liked that idea. He said, 'I'll help you. I'll open my files to you for the first time.' And it was a wonderful trove of information that shed lots of light on Jackie and all the people around her."

Dr. Frank Finnerty is a character Bedell Smith learned about while researching her book. Most people had never heard of him before.

She says, "He was a cardiologist. Young, handsome, Catholic, a neighbor of Bobby Kennedy. Jackie was over at Bobby Kennedy's house one day, playing touch football and she sprained her ankle. And Dr. Finnerty was there because he was a neighbor. And he treated her. And she just sensed that he was an empathetic person and said, 'Do you mind if I call you from time to time?' So she started to call him."

And so when Jackie Kennedy was 31 years old, Dr. Finnerty became sort of her de facto psychotherapist.

She even shared about her sex life. Her main complaint, Bedell Smith says was "that she felt sort of left out of the experience, to put it in a delicate way. And he (Dr. Finnerty) came up with a whole scenario for her to talk to Jack Kennedy about this situation. And she reported back that, in fact, things were better. And so, to me, that whole story spoke to how much she loved him, how much she wanted to try and make their marriage better. She couldn't avail herself of a marriage counselor at that stage, when there was too much of a stigma. So she did what was the best. She improvised."

Also in her book, Bedell Smith talks about how in the last year or so, the president was very sick.

Click here to read an excerpt from "Grace and Power."