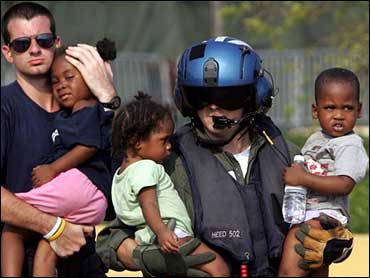 With the last weary refugees rescued from the Superdome and convention center, New Orleans turned its attention Sunday to gathering up and counting the dead across a ghastly landscape awash in thousands of corpses.

The bodies of those killed in Hurricane Katrina are everywhere: hidden in attics, floating in the ruined city, crumpled in wheelchairs, abandoned on highways.

"I think it's evident it's in the thousands," Health and Human Services Secretary Michael Leavitt said Sunday on CNN, echoing predictions by city and state officials last week about the death toll.

New Orleans Mayor Ray Nagin said it was likely thousands were dead based on the city's population of 500,000, the percentage who left before the storm hit and the number evacuated from the shelters.

"So you probably have another 50-60,000 out there," Nagin said. "You do the math, man, what do you think? Five percent is unreasonable? Ten percent? Twenty percent? It's going to be a big number."

"We are still in the emergency. People must take seriously the fact that we have enormous ongoing challenges which we have to address right now or we're going to continue to have serious problems," Homeland Security Secretary Michael Chertoff Told CBS's Face The Nation.

Chertoddd warned the the scene was going to be as ugly as anyone can imagine.

He added rescuers going house to house have encountered a significant number of people who have said they do not want to evacuate, hindering relief efforts.

Sunday morning, a woman's body remained lying at the corner of Jackson Avenue and Magazine Street,, a business area in the lower Garden District with antique shops on the edge of blighted housing. The body had been there since at least Wednesday.

As days passed, people covered her with blankets or plastic.

By Sunday, a short wall of bricks had been built around her body, holding down a plastic tarpaulin. On it, someone had spray-painted a cross and the words, "Here lies Vera. God help us."

Leavitt said he had received a report of an outbreak of dysentery in Biloxi, Mississippi, with disease among the concerns of federal officials in the hurricane's aftermath. Dysentery is a painful intestinal disease that can cause dehydration and can sometimes be fatal.

The lack of clean drinking water in parts of the Gulf Coast region and standing flood waters with decomposing bodies and human waste in the streets of New Orleans could cause a rash of infectious diseases, including West Nile virus and the often fatal E. coli bacteria.

"All of the infectious diseases that occur when people are in large congregations of people can spread," Leavitt said.

Chertoff defended the job of Federal Emergency Management Agency Director Michael Brown and declined to get into a discussion about whether the government moved quickly and forcefully enough to deal with the catastrophe, saying there would be plenty of time for a review.

Chertoff told Face The Nation: "I think that the lesson of this hurricane, which we will clearly look at as we go over an after-action evaluation, is going to be very valuable in moving forward. I mean, this was an ultra-catastrophe, but we have to be prepared even for ultra-catastrophes, even things that happen once in a lifetime and once in a generation. So, yes, we will be studying that."

But some progress was evident. The last 300 refugees at the Superdome were evacuated Saturday evening, eliciting cheers from members of the Texas National Guard who had been standing watch over the facility for nearly a week as some 20,000 hurricane survivors waited for rescue.

On Sunday, utilities planned to send trucks into the city to assess storm damage for the first time since Katrina struck. Morgan Stewart, a spokesman for electricity provider Entergy Corp., said the National Guard would escort the company's vehicles.

The convention center was "almost empty" after 4,200 people were removed, according to Marty Bahamonde, a spokesman for the Federal Emergency Management Agency. Earlier estimates of the crowd climbed as high as 25,000.

Thousands of evacuees dragged their meager belongings to buses, the mood more numb than jubilant. Yolando Sanders, who had been stuck at the convention center for five days, was among those who filed past corpses to reach the buses.

Nearby, a woman lay dead in a wheelchair on the front steps. A man was covered in a black drape with a dry line of blood running to the gutter, where it had pooled. Another had lain on a chaise lounge for four days, his stocking feet poking out from under a quilt.

The overwhelming majority of those stranded in the post-Katrina chaos were those without the resources to escape, and, overwhelmingly, they were black.

"The first few days were a natural disaster. The last four days were a man-made disaster," said Phillip Holt, 51, who was rescued from his home Saturday with his partner.

Tens of thousands of people had been evacuated from the city, seeking safety in Texas, Tennessee and many other states.