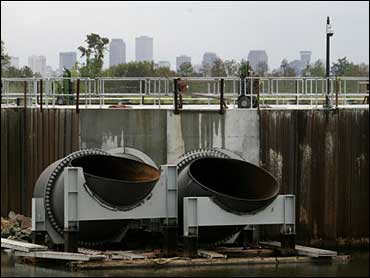 When the Army Corps of Engineers solicited bids for drainage pumps for New Orleans, it copied the specifications — typos and all — from the catalog of the manufacturer that ultimately won the $32 million contract, a review of documents by The Associated Press found.

The pumps, supplied by Moving Water Industries Corp. of Deerfield Beach, Florida, and installed at canals before the start of the 2006 hurricane season, proved to be defective, as the AP reported in March. The matter is under investigation by the Government Accountability Office, the investigative arm of Congress.

In a letter dated April 13, Sen. David Vitter of Louisiana called on the Corps to look into how the politically connected company got the post-Hurricane Katrina contract. MWI employed former Florida Gov. Jeb Bush, President Bush's brother, to market its pumps during the 1980s, and top MWI officials have been major contributors to the Republican Party.

While it may not be a violation of federal regulations to adopt a company's technical specifications, it is frowned on, especially for large jobs like the MWI contract, because it could give the impression the job was rigged for the benefit of a certain company, contractors familiar with Corps practices say.

The Corps' January 2006 call for bids for 34 pumps used the wording on how the pumps should be built and tested, with minor changes, found in MWI catalogs.

The specifications were so similar that an erroneous phrase in MWI catalogs — "the discharge tube and head assembly shall be abrasive resistance steel" — also appears in the Corps specifications. The phrase should say "abrasion resistant steel." An incorrect reference to the type of steel that would be required apparently was also lifted.

Eugene Pawlik, a Corps spokesman in Washington, said the agency is working on a response to Vitter's letter.

MWI declined to discuss how it won the contract. GAO would not talk about its probe.

Richard White, a federal contracting expert, said it is "not unheard of for a spec to be copied, in particular in cases of emergency purchases."

"It's not a good practice, but it's not anything egregious, especially if the Corps allowed other companies to negotiate to change it," White said.

After Katrina swamped about 80 percent of the city, Congress appropriated $5.7 billion to rebuild New Orleans' flood protection systems. Vitter and fellow Louisiana Sen. Mary Landrieu have excoriated the Corps over its workmanship since Katrina.

A May 2006 memo by a Corps inspector working on the project, provided to the AP earlier this year, warned that the pumps were faulty and would not work if needed to remove water during a hurricane. GAO opened its investigation after the memo surfaced.

The Corps and MWI insist the pumps would have worked, but last year's mild hurricane season never put them to the test. The pumps have been overhauled and are being reinstalled.

The Corps withheld about 20 percent of MWI's contract price — including an incentive of about $5 million to deliver them by June 1, 2006 — until the flaws have been resolved. But the Corps also spent $4.5 million for six additional MWI pumps for use in troubleshooting the defective ones.

The Corps contract officer overseeing the January 2006 bid, Cindy Nicholas, was told about the copied specifications during a conference call with FPI Inc., a Florida company that also bid on the project, shortly after MWI was awarded the contract. A recording of the briefing was provided to the AP by FPI.

"No, I'm not aware of that," Nicholas replied.

Corps official Dan Bradley said during the briefing that consulting engineers had a hand in drawing up the specifications.

Purcell then complained: "We were forced to meet someone else's specifications in entirety." He said the consultants did not cooperate with FPI, and he charged that MWI was given "a head's up" about the job. That, he said, was evident by MWI's order for pump engines before the contract was even put out to bid.

"I don't know anything about that, sir," Nicholas responded. She said that if MWI ordered the engines ahead of time, "they took a big risk."

"Obviously it was a risk that paid off, let's put it that way. They must have had some assurance!" Purcell exclaimed.

"Not from me," Nicholas said.

MWI would not comment on the alleged order for pump engines before the award of the contract.

Purcell, a former MWI employee, is a plaintiff in a federal whistleblower lawsuit accusing MWI of fraudulently helping Nigeria obtain $74 million in taxpayer-backed loans for overpriced and unnecessary pumping equipment. The U.S. Justice Department has joined the suit as a plaintiff.