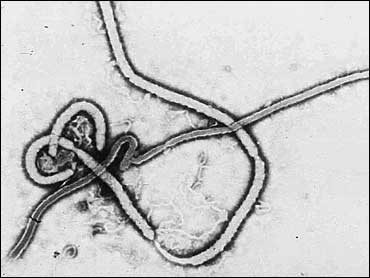 If the same approach works in humans, it could control or prevent outbreaks of the rare, but horrific infection, which causes high fever, severe pain and bleeding from the eyes as blood vessels collapse. Nearly everyone who is infected dies within a few days.

Scientists not connected with the experiment said if the vaccine works in other primates, it probably will work in humans.

Health workers in Africa — the only place the few outbreaks have occurred — might be the most likely recipients of an approved Ebola vaccine. Researchers who handle samples of the virus in laboratories under strictly controlled conditions also might use it.

The experimental vaccine has not been tested on humans. But Dr. Gary J. Nabel of the National Institutes of Health, one of the vaccine developers, said he hopes to have it ready for human studies by the end of next year, pending approval by the Food and Drug Administration.

Microbiologist C.J. Peters of the University of Texas Medical Branch in Galveston said more animal trials are needed before regulatory approval of a human vaccine could be sought. He said it would also be important to determine how the vaccine conveys its immunity and how long it would protect against the infection.

NIH researchers tested the new vaccine by giving eight macaque monkeys a single injection of a weakened virus modified with a protein from the Ebola virus.

Twenty-eight days later, the monkeys were injected with an Ebola virus strain taken from a human who died from the disease in 1995. All eight monkeys remained healthy, even those given high doses of the Ebola.

However, all the monkeys in a separate control group that were not given the vaccine died after they were exposed to the virus.

The findings appear in this week's issue of the journal Nature.

Nabel, director of the NIH's Vaccine Research Center, developed an earlier version of the vaccine for monkeys three years ago. But the injections were administered over a six-month period that included a booster shot.

"While that might be useful as a preventative vaccine, for any individual caught up in the middle of an outbreak it wasn't going to help them," Nabel said.

So his team and scientists at the U.S. Army Medical Research Institute of Infectious Diseases in Fort Detrick, Md., decided to try just the "booster" portion of their vaccine.

They found that while it produced a weaker immune response in the monkeys, it was still strong enough to prevent real infection.

However, even though the vaccine would probably protect central African great apes from Ebola — a threat along with poaching and habitat loss — it would be tough to vaccinate them, one wildlife researcher said.

Darting thousands of endangered gorillas and chimpanzees would be nearly impossible because they are wary of humans and live in virtually impenetrable forests, said Peter Walsh, a Princeton University research fellow who has studied Ebola and primate losses.