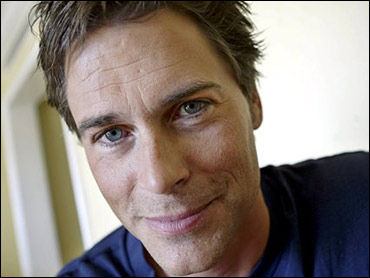 Rob Lowe's television career has taken him from teenager in a family drama, to deaf-mute in a Stephen King-based miniseries to policy wonk in a popular series about the White House.

In his latest role, Lowe is Dr. Billy Grant, an in-house physician at a high-end Vegas hotel and casino. The show, "Dr. Vegas," debuts Friday night at 10 p.m. ET on CBS.

"We shot the first episode entirely in Las Vegas and it was great until the crew began losing half of their paycheck and disappearing for other work to support their problem. We've now built an entire casino over three stages," says Lowe.

Lowe's character has a gambling addiction. "He's got some issues which makes it very fun," says Lowe. "It was nice dichotomy to play a bit of a bad boy who has a very serious job at hand."

Joe Pantoliano, who won an Emmy for his tough-guy role on HBO's "The Sopranos," plays the casino's general manager.

"You have to love him, but I haven't taken to him wearing berets," says Lowe.

Lowe also is the star of "Perfect Strangers," a CBS TV movie airing on Oct. 17.

Lowe works with the Lymphoma Coalition, a network of patient groups from around the world that aims to help people recognize lymphoma symptoms, which are often mistaken for less serious conditions such as the flu, tuberculosis or fatigue.

Lowe's father was diagnosed with the most common form of lymphoma, non-Hodgkin lymphoma, in 1990.

"My father is 11 years cancer-free, and we had the worldwide lymphoma awareness day. The first one was last week to help people realize it's a very treatable cancer, but treatable only when caught early," says Lowe.

He says his father "is doing well and still beating me at tennis."