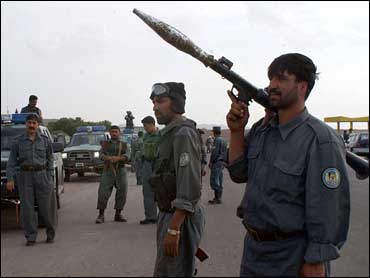 NATO-led troops killed 75 suspected insurgents on the first day of an offensive against Taliban militants in a valley in southern Afghanistan, a British military officer said Tuesday.

The militants died Monday, when British, Danish and Afghan troops fought their way up the Sangin Valley in Helmand province, Maj. Dominic Biddick, who commanded a company of British troops in the operation, told The Associated Press.

Biddick said the troops detained several more suspected militants and discovered an arms cache during "a full day of fighting."

One British soldier was wounded, he said, without providing any details of his condition.

"The operation went better than most people had anticipated," Biddick told an AP reporter traveling with his unit. "At one point, there were six companies in clashes at the same time."

His tally of 75 insurgents killed could not be independently verified.

The Sangin Valley mission is part of Operation Achilles, NATO's largest-ever maneuver against the Taliban, which began in March.

The operation is focused on reclaiming Helmand province, Afghanistan's most volatile, from insurgents so that the government of President Hamid Karzai can expand its reach.

On Monday, the U.S. military reported that 136 suspected militants were killed in three days of fighting in western Herat province — the deadliest clashes in Afghanistan since January.