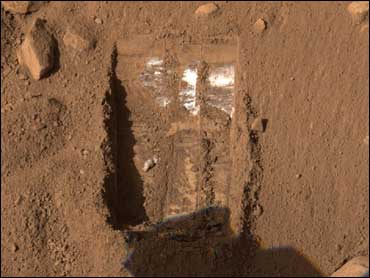 By melting icy soil in one of its lab instruments, the robot confirmed the presence of frozen water lurking below the Martian permafrost. Until now, evidence of ice in Mars' north pole region has been largely circumstantial.

In 2002, the orbiting Odyssey spacecraft spied what looked like a reservoir of buried ice. After Phoenix arrived, it found what looked like ice in a hard patch underneath its landing site and changes in a trench indicated some ice had turned to gas when exposed to the sun.

"We've now finally touched it and tasted it," William Boynton of the University of Arizona said during a news conference in Tucson on Thursday. "From my standpoint, it tastes very fine."

Phoenix landed on Mars on May 25 on a three-month hunt to determine if it could support life. It is conducting experiments to learn whether the ice ever melted in the red planet's history that could have led to a more hospitable environment. It is also searching for the elusive organic-based compounds essential for simple life forms to emerge.

Other Mars missions have gathered clues that the planet was once warmer and wetter unlike the current desert conditions. Orbiting probes have found landforms such as gullies and canals that were likely carved by liquid water. Spacecraft on the surface have found evidence of ancient water by studying minerals in rocks. Phoenix is the first to touch ice and taste water by melting it.

The ice confirmation earlier this week was accidental. After two failed attempts to deliver ice-rich soil to one of Phoenix's eight lab ovens, researchers decided to collect pure soil instead. Surprisingly, the sample was mixed with a little bit of ice, said Boynton, who heads the oven instrument.

Researchers were able to prove the soil had ice in it because it melted in the oven at 32 degrees - the melting point of ice - and released water molecules. Plans called for baking the soil at even higher temperatures next week to sniff for carbon-based compounds.

The latest scientific finding is the first piece of good news for a mission that has been dogged by difficulties in recent weeks.

An electrical short on one of Phoenix's test ovens threatened the instrument, but scientists said the problem has not recurred. The lander, which spent the past several weeks drilling into the hard ice, also had trouble delivering ice shavings into an oven until the success this week.

NASA said Phoenix has achieved minimum success thus far. The space agency on Thursday announced that it would extend the mission for an extra five weeks until the end of September, adding $2 million more to the $420 million price tag, said Michael Meyer, Mars chief scientist at NASA headquarters.

Unlike the twin rovers roaming near the Martian equator, Phoenix's lifetime cannot be extended much more because it likely won't have enough power to survive the Martian winter

The science team also released a color panorama of Phoenix's landing site using more than 400 images taken by Phoenix. The view "was painstakingly stitched together," said Mark Lemmon of Texas A&M University, who headed the effort.

The portrait revealed a Martian surface that was coated with dust and dotted with rocks.