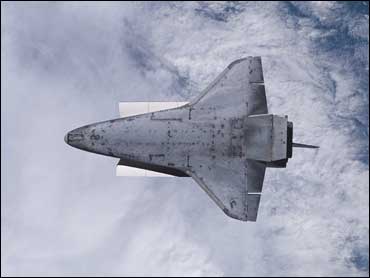 Two spacewalking astronauts replaced equipment on the international space station as NASA worked feverishly to decide whether the shuttle Endeavour's crew would need to repair a gouge on the ship's belly later this week.

The gouge was made just 58 seconds into Endeavour's flight, reports CBS News correspondent Kelly Cobiella. Foam on the external fuel tank broke free and a small piece hit the shuttle's underbelly, punching a cone-shaped hole three inches long and about an inch deep almost to the orbiter's aluminum skin.

Teacher-turned-astronaut Barbara Morgan and other crew members spent much of Sunday using a laser boom attached to the shuttle's robot arm to create 3-D images of the gash and a few other damaged areas that NASA officials say pose no threat.

Mission managers expect to decide by Tuesday at the latest whether to send astronauts out to patch the gouge. Engineers are trying to determine whether the marred area can withstand the searing heat of atmospheric re-entry at flight's end. Actual heating tests will be conducted on similarly damaged samples.

The space shuttle Columbia was destroyed in 2003 when hot atmospheric gases seeped into a hole in its wing and melted the wing from the inside out. A foam strike at liftoff caused the gash.

But CBS News space consultant Bill Harwood says it's "not a Columbia-class problem. They had a four-to-six-inch hole in the leading edge of the lift wing that destroyed the ship on re-entry. What we're talking about here is a very small pit in the belly of the shuttle and the area that's gone down close to the skin of the orbiter is only a tenth of an inch by an inch, so it's much smaller damage than Columbia had."

On the other hand, Harwood says, "you don't want any breach in the heat shield. They'll take time to think about this pretty hard about whether they need to do a repair or not."

Meanwhile, the mission's second spacewalk went on as usual on Monday with astronauts Dave Williams and Rick Mastracchio replacing one of the four gyroscopes that help control the orbiting outpost's orientation. Crewmate Tracy Caldwell guided them from inside the station.

Mastracchio and Williams carefully unbolted the broken gyroscope from a space station truss and swung the more than 600-pound piece of equipment onto a temporary storage platform. Then Williams latched himself onto the station's robotic arm for a ride to the shuttle's cargo bay, where he retrieved the new replacement gyroscope.

"This is the most amazing ride I've ever had," Williams said.

Astronauts plan to conduct two more spacewalks on Wednesday and Friday, and they could add the gouge repairs to their to-do list. Depending on the extent of the damage, astronauts can apply protective paint, screw on a shielding panel, or squirt in filler goo.

The damaged thermal tiles are located near the right main landing gear door. In a stroke of luck, they're right beneath the aluminum framework for the right wing, which would offer extra protection during the ride back to Earth.

The foam came off a bracket on the external fuel tank and fell down onto a strut on the tank, then bounced up, right into Endeavour's belly. Ice apparently formed before liftoff near the bracket, which helps hold the long fuel feed line to the tank, and caused the foam to pop off when subjected to the vibrations of launch.

It is possible some ice was attached to the foam, which would have made the impact even harder. The debris that came off is believed to have been grapefruit-sized.

These brackets have lost foam in previous launches, a concern for NASA, Shannon said. A switch to titanium brackets, eliminating foam, will not occur before next year.

Shannon said he did not know whether the recurring foam problem would delay the next shuttle flight, currently scheduled for October.

Endeavour has been docked at the space station since Friday. It will remain there until Aug. 20 for a record 10-day stay. Mission managers on Sunday approved the prolonged visit based on the successful testing of a new power transfer system flying on Endeavour. The system is drawing power from the station and converting it for use aboard the shuttle.

The two Russian cosmonauts aboard the space station lost radio communication with the Moscow mission control center overnight when a line apparently was damaged by a nearby construction project, station flight director Heather Rarick said.

The cosmonauts will be able to use American radios, and the outage is not expected to affect Monday's work.

"There's nothing like a good, old-school 1970s jam to get you up in the morning," astronaut Alvin Drew said.