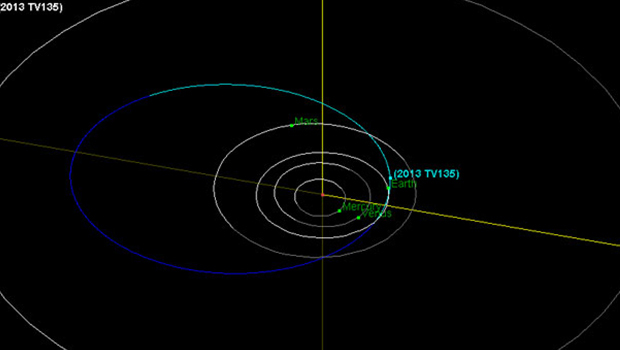 On Oct. 8, a team of Ukrainian astronomers discovered a 1,300-foot-wide asteroid that will pass close to Earth in August 2032. At the time, NASA estimated that the chance of the asteroid colliding with Earth was 1 in 63,000.

"This is a relatively new discovery," Don Yeomans of NASA's Near-Earth Object Program office in Pasadena, Calif., said in a release at the time. "With more observations, I fully expect we will be able to significantly reduce, or rule out entirely, any impact probability for the foreseeable future."

But now, instead of the expected reduction, the program office has increased the likelihood that the asteroid will strike Earth is closer to 1 in 9,090.

Asteroid 2013 TV135 is one of two asteroids that currently rank on the Torino Scale, which measures asteroid impact hazards. Both asteroids are rated a 1. Earlier this year, the 325-meter-wide asteroid 99942 Apophis was downgraded from its peak score of 4 to a zero.

The upgraded risk is still minor, as NASA remains 99.989 percent certain that asteroid 2013 TV135 will complete a safe flyby, compared to the original 99.992 percent certainty.

As Yeomans said, the risk will likely decrease as even more observations come in, because calculating the path of an asteroid 19 years out is not exactly cut and dry. It is especially complicated at first, when astronomers do not know the exact position, speed or direction of the asteroid.

Writing for Slate, astronomer Phil Plait explained why the impact risk tends to increase at first, before eventually falling.

Having estimates of position, speed and direction allows astronomers to say where they think the asteroid will be, within a large swatch of space. If that area overlaps with where the Earth will be in the same time frame, there is a chance of impact. But the area is much larger than the size of the Earth, so the risk is small.

As astronomers continue to narrow down the measurements, the area where the asteroid will potentially be will decrease. If the area still overlaps with Earth's orbit, the likelihood of impact will increase, because it is a smaller ratio within the space.

But as they continue to narrow the size of the area where the asteroid might be, it might be narrowed to a point where it does not overlap with Earth.

Then, the probability of impact would become close to zero.

The impact risk of asteroid 99942 Aphophis seesawed in a similar way. In 2004 it was ranked a 4 on the Torino Scale. The possibility of impact started at 1 in 200, then jumped to 1 in 37. But by early 2013, after astronomers had enough time to further examine the asteroid, the impact risk was ruled out.

In the unlikely event that 2013 TV135 does collide with Earth, it will strike with the force of 2,500 megatons of TNT, making it 50 times more powerful that the largest nuclear bomb that has ever been set off.

But it is much more likely that, just as astronomers saw with 99942 Aphophis, the risk of impact will become negligible long before 2032.