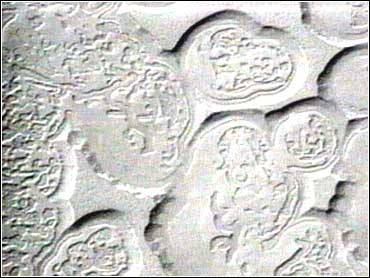 The space agency hopes to duplicate the success it had with its Mars Pathfinder three years ago.

The first is scheduled for lift-off on May 22, 2003 with the second targeted for June 4. Following a seven-and-a-half month cruise, the first rover should enter Mars' atmosphere on January 2, 2004. The second should touch down on January 20.

And during the next two to three years, engineers and scientists will conduct an intensive search for the best potential touchdown sites.

Using the flood of data still coming in from Mars Global Surveyor, and additional material expected to start arriving in 2002 from the Mars 2001 Orbiter, scientists will search for locations with the fewest hazards and select the best candidates.

The rovers could land thousands of miles apart. And Dr. Ed Weiler, Associate Administrator for Space Science, NASA Headquarters, Washington, thinks it will be an interesting challenge.

"For the first time, science and technology have given us the capability to explore alien planets in ways that used to exist only in science fiction movies," said Dr. Weiler.

"To have two rovers driving over dramatically different regions of Mars at the same time, to be able to drive over and see what's on the other side of the hill—it's an incredibly exciting idea."

Weiler believes everyone on Earth who ever dreamed of being an explorer on an alien planet will want to go along for the ride and the dual exploration of Mars.

"The goal of both rovers will be to learn about ancient water and climate on Mars," said Professor Steven Squyres, Cornell University, Ithaca, N.Y., and Principal Investigator for the rovers' Athena science package.

"You can think of each rover as a robotic field geologist, equipped to read the geologic record at its landing site and to learn what the conditions were like back when the rocks and soils there were formed," said Squyres.

As for the practicality of a dual rover mission, Scott Hubbard, Mars Program Director at NASA Headquarters, said after the idea of two missions was weighed against resource requirements and schedule constraints, they concluded it could be successful.

"We also determined that, in addition to the prospect of doubling our scientific return, this two-pronged approach adds resiliency and robustness to our exploration programs," said Hubbard.

In December, 1999, the Mars Polar Lander failed, probably because of the early shutdown of its rocket engines, which probably caused the craft to crash into the red planet.

Two probes that were to land independently ater being carried to Mars by the mother ship also failed.

The Mars Polar Lander was launched Jan. 3, 1999. All radio contact was lost Dec. 3 as the spacecraft approached the planet.

Just three months earlier, its $125 million companion Mars Climate Orbiter was lost in space due to a simple math error: failure to convert English units to metric. It was a reflection, say investigators, of exploration done on the cheap -- under-funded by 30 percent.