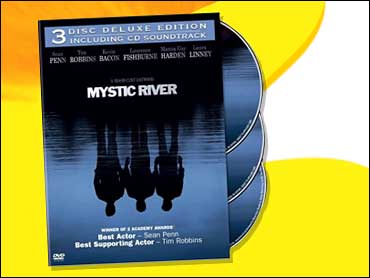 It's rare that a big studio makes a good, thoughtful film for adults. Much of the time, studios are trying to squeeze dollars out of the teen market. But director Clint Eastwood wanted to make a movie that reminded him of the films he loved when he was starting out. He had to fight for it, but in the end, he scored a major victory.

Eastwood tells The Early Show entertainment contributor and People magazine senior editor, Jess Cagle, "It's fun to go back to sort of an old-fashioned movie, like the kind of movie I think we might have grown up with, where you have the story and the characters and that sort of thing."

"Mystic River" is an intricate thriller, which follows three boyhood pals, reunited as adversaries in a murder investigation: Sean Penn as a vengeful father, Kevin Bacon as a cop on the case and Tim Robbins as a suspect.

In addition, Robbin's character is haunted by a terrible event from his childhood. It was the story's many layers that attracted Eastwood to the project.

"It was a detective story," he says. "There was a mystery to it, but at the same token ,it was about the family and the bereavement of a family, and also the abduction of a child and what it does to a child for the rest of their life, and, carrying the baggage that the child has to carry as a grownup."

When casting the film, Eastwood knew exactly who he wanted for the lead role: Sean Penn.

"I just think he's one of the better actor we have, especially in that age group," Eastwood says. "He may be the top of the line, and he may go on to be the top ever. He's got that kind of potential."

Eastwood also thought Robbins was at the top of his game, and praised his commitment by saying, "Tim Robbins has directed before; he also has good feeling. He stays in his character more consistently because this character was very difficult. The last day of the picture, when we were all saying our goodbyes, he said it's really going to be a relief to get rid of this character for a while."

The film made over $90 million at the box office and Sean Penn and Tim Robbins won Oscars for their performances. Eastwood lost the directing award to "The Lord Of The Rings'" Peter Jackson. But that's OK. Eastwood already has two Oscars. With "Mystic River," he added another classic to his resume.

"You just want to have your place in history," he says. "You hope the film has enough strength that people will look back upon it 10, 15, 20, 30 and beyond years and say that was an exciting film."

Also being released this week is the opposites-attract comedy, "Along Came Polly", starring Ben Stiller and Jennifer Aniston

And next Tuesday, Adam Sandler and Drew Barrymore make their way to home video in "50 First Dates," which is full of outtakes and bloopers.