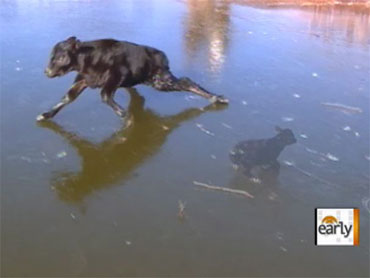 A quick-thinking helicopter pilot for an Oklahoma City television station came to the rescue of a calf stranded on an icy farm pond in northwest Oklahoma.

A rancher near Watonga called KWTV-Channel 9 Monday morning after his calf got stuck in the middle of the iced-over pond.

Pilot Mason Dunn flew to the scene, hovered over the pond and used the wind from the helicopter's rotor blades to push the calf toward the shore. Although the thin layer of ice eventually cracked, the struggling calf was able to make it out of the water.

It was the second time Dunn came to the rescue of a stranded animal. Three years ago, he helped push a stranded deer to safety after it lost its footing on an icy lake.