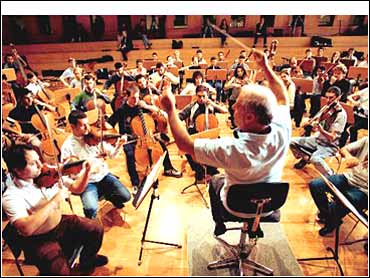 Brain structures that are activated by food or sex are also turned on by music, researchers reported Tuesday in a study.

"People now are using music to help them deal with sadness and fear," said Dr. Anne Blood, a researcher at Massachusetts General Hospital in Charlestown, Mass. "We are showing in our study that music is triggering systems in the brain that make them feel happy."

According to a study appearing Tuesday in the Proceedings of the National Academy of Sciences, Blood and her co-author, Robert Zatorre of McGill University in Montreal, used positron emission tomography, or PET scans, to find which areas of the brain are stimulated by music that test subjects had said caused "shivers down the spine."

"In the reward and emotion systems of the brain, there are certain structures that are active," Blood said. This activity clearly shows up when patients are given PET scans at the same time they are experiencing the stimuli that produce euphoria.

Previous studies have linked the midbrain, the ventral striatum and parts of the cortex to sex and food. The new study, Blood said, clearly shows a similar response in these areas to musical sounds the test subjects had preselected as beautiful enough to give them "chills." There was no such response, however, to other types of sound.

Dr. Ira Glick, professor of psychiatry, Stanford University School of Medicine, said music "is one way to cope" in periods of stress, and it is known that "behind every emotion and every piece of behavior there is a change in a molecule.

"With this new technology, the PET, for the first time we can see it," he said. "It is exciting to see the biology unfold before our eyes as we explore the human mind."

In the study, Blood and Zatorre asked 10 musicians, five men and five women, to choose the stirring music. The subjects were then given PET scans as they listened to four types of audio stimuli - the selected music, other music, general noise or silence. Each sequence was repeated three times in random order.

Blood said when the subjects heard the music that gave them "chills," then the PET scans detected activity in the portions of the brain that are also stimulated by food and sex.

Although the tested subjects were all musicians, Blood said that "80 percent of people experience these chills" from some types of music.

"The experience of chills is a very common phenomenon, and it is highly likely that the same (brain) structures would be active in other people," she said.

Blood said the reaction to music is highly individualized and culturally based. She said this suggests that some people may react to rock 'n' roll in the same way that others are affected by Beethoven.

Just why humans developed such a biologically based appreciation of music is not clear.

The appreciation of food and the drive for sex evolved to help the survival of the species, but "music did not develop strictly for survival purposes," she said.

"ecause it activates the parts the brain that makes us happy suggests that music benefits our physical and mental well-being," Blood said.

By Paul Recer
© MMI The Associated Press. All Rights Reserved. This material may not be published, broadcast, rewritten, or redistributed