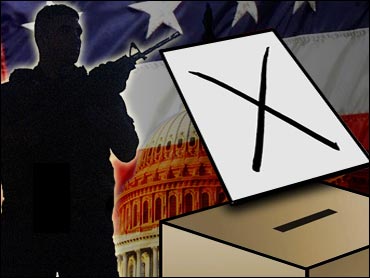 With the campaigns in full gear and voters set to choose in less than four months, senior U.S. election officials are sounding the alarm that no one has planned what to do if a terrorist attack takes place just as the polls open, reports CBS News Correspondent Jim Stewart.

And, significantly, the man most worried is the man responsible: DeForest Soaries, chairman of the U.S. Election Assistance Commission.

"Let's assume the process is attacked. My concern is we don't have a plan," Soaries says.

"Do we tell California on two o'clock Election Day that if they stop voting, 'Well, just too bad?' Do we tell New York that they should suspend voting and we will count the votes anyway? I mean we don't have a plan. The Constitution gives no one the authority to postpone an election."

Soaries, a Republican, says he has pestered the White House and Homeland Security with scary "what-if" scenarios for Election Day, but gets the impression they're more focused on protecting the pre-election conventions and guarding against a large-scale Madrid-style attack days or weeks before the election.

"What we have to do is set some standards for the suspension of voting," says Soaries. "At what point does the state determine that voting is no longer practical or safe?"

The problem is that Congress sets the date for national elections but states run the elections their own way, as witnessed by the Florida recount debacle four years ago.

Soaries believes it will take an act of Congress to set up the machinery allowing the postponement or rescheduling of a presidential election – and this close to the election that may be impossible to achieve.

According to a report in Newsweek, Soaries recently wrote to Homeland Security director Tom Ridge to say that, "the federal government has no agency that has the statutory authority to cancel and reschedule a federal election."

A Homeland Security official tells CBS News the department passed on the request to the Justice Department to explore what legal steps might be required to postpone the national elections.

The official stressed that Homeland Security was not making the inquiry itself, but merely passing on Soaries' concerns.

Ridge warned last week that al Qaeda was "moving forward with its plans to conduct an attack in the U.S. in an effort to disrupt our democratic process." That warning came more than a month after Attorney General John Ashcroft said al Qaeda planned an attack sometime this summer.

"We're beginning to pick up on websites and other reporting a certain sense of anticipation or expectation," Ridge told the CBS News Early Show on Friday. "So you plug all these things in to the picture, it is new. It is different. It is sobering."

In April, the House of Representatives approved a bill to set up speedy special elections if 100 or more of its members are killed.

CBS News Correspondent Bob Fuss reports the measure would be triggered if more than 100 House members perished and would require states to hold special elections within 45 days.

The 306-97 vote put aside for now the larger issue of whether the Constitution should be amended to allow for temporary appointments in the event that an attack caused mass fatalities among lawmakers. Currently, the Constitution requires that House vacancies be filled by election while vacancies in the Senate can be filled by gubernatorial appointees.