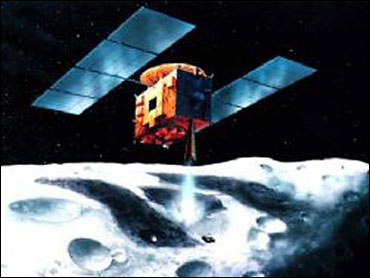 A Japanese spacecraft that landed on an asteroid to collect surface samples and bring them back to Earth for analysis has developed trouble with its thruster system, the Japan Aerospace Exploration Agency said Tuesday.

The problem is the latest facing Japan's attempt to complete the world's first two-way trip to an asteroid, following earlier problems with the probe's gyroscopes and two botched practice landings.

The Hayabusa probe appeared to have touched down Saturday, just long enough to collect powder from the asteroid's surface and lift off again. But it soon began shaking due to a gas leak from a thruster, which continued through Tuesday, Japan's space agency, JAXA, said in a statement on its Web site. Communication was also briefly lost but restored earlier in the day.

"Judging from the current circumstances, a certain amount of time will be needed to resume the probe's operations," JAXA said.

The agency is trying to fix the problem by a December deadline to begin its 180 million miles journey home. Kyodo News agency said failure to remedy the glitch may make the probe's return impossible.

Hayabusa was launched in May 2003. On top of recovering samples from the asteroid, named Itokawa, the probe is also testing a new type of ion engine that uses an electric field to accelerate positive ions to a high velocity. It also swung by Earth for a gravity assist that propelled the probe toward Itokawa.

How to take a shower in space

The Hayabusa mission is part of Japan's efforts to expand its space exploration program. Earlier this year, JAXA said it would send its first astronauts into space and set up a base on the moon by 2025.

But the agency has recently suffered a series of setbacks. A moon probe originally scheduled for launch in 2005 has been delayed, while the agency abandoned a mission to Mars two years ago after a probe moved off course.

If all goes well with Hayabusa, it will be the first time a probe returns to Earth with samples from an asteroid, according to JAXA. A NASA probe collected data for two weeks from the asteroid Eros in 2001, but did not return with samples.