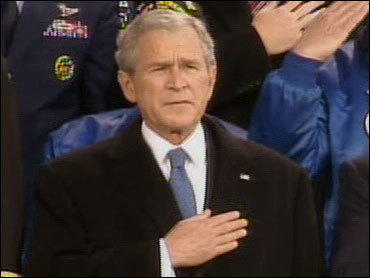 Jesse Singal writes for The Boston Globe's opinion pages. He can be reached at jsingal@globe.com.


Humankind is, roughly speaking, divided into neurotic and non-neurotic people. Some people stay awake at night obsessing over every decision they've made, endlessly pondering intractable problems and existential quandaries-and some people don't. George W. Bush is firmly in the latter category.

We've long known this. So, when Bush sat down for an interview with Matt Lauer on Monday night-the day before the release of his memoir, Decision Points-it's not as though anyone expected him to be particularly chastened or introspective. Still, the hour-long special was anticlimactic; it hammered home the reality that Bush just isn't a very interesting figure. Even after two terms in which he embodied liberals' worst fears and aroused their most righteous passions, there's little the ex-president says that's worth analyzing-and, on his own, there's little he can teach anyone about American politics.

To recap: Bush admits to few mistakes, seems to take pride in not learning from them when he does, and, well into his seventh decade of life, doesn't see the need to address even the most complex situations with anything approaching nuance. Yes, these are old, tired complaints. College freshmen were making them in 2002. But, in talking to Lauer, Bush confirmed every one of them.

"I'm a deliberative person," he told Lauer. But he isn't. Deliberative people can smoothly handle follow-up questions, and follow-up questions remain the proverbial mice to Bush's lumbering elephant. He said he was sure he was for waterboarding, but, when Lauer asked if he'd be OK with a foreign country waterboarding Americans, Bush dodged the question, instead saying that people should read Decision Points. He was absolutely certain about that Iraq intelligence, he assured Lauer, but, when asked if he'd make the same decision to go to war again, all Bush said was that Iraqis are better off without Saddam. He referenced his bailout-era "I've abandoned free market principles to save the free market system" line with something like pride, but, apparently, he's never taken the obvious next step and asked himself whether the meltdown should spur a full reexamination of his thoughts on the free market. (He assured Lauer that a lack of regulation wasn't responsible for the crisis.)

The interview was like an all-you-can-eat buffet for Bush's critics, from his defense of the waterboarding of Khalid Sheikh Muhammad to his claim, "We didn't have any intelligence that said that, you know, 'Get ready, they're going to fly airplanes into New York buildings.'" Then, there was the contrast, highlighted by the very gentle Lauer, between Bush's take on Katrina (it "affected [him] deeply") and his take on Kanye West's accusation that he doesn't care about black people ("It was one of the most disgusting moments of my presidency").
But this has all been so endlessly rehashed and reheated that there are globs of Iraq stuck to the microwave tray; splatters of tax cuts for the rich splayed across the door. At this point, most people have very strong feelings, one way or another, on the subject of George W. Bush. They're set-and unlikely to change.
So maybe the takeaway here isn't the sort of thing we saw scrawled angrily on placards during Bush's presidency, but rather, a simpler lesson: When you are in a position of power and you are not neurotic, you'll be relentlessly shaped by the forces around you. That's not to say any president is immune to this-Obama, after all, is quite neurotic, and he is buffeted by forces over which he has little control-but, if nature abhors a vacuum, political power abhors one even more. Bush was mostly a vacuum. A good-natured, privileged vacuum, perhaps, and one with a bit of inspiration in his biography (hasn't had a drink since 1986, he said), but a vacuum nonetheless.

Those who study his presidency, then, won't find a huge amount in the man himself. They'll try to reach out and touch Bush the man, the thinker, the politician-and accidentally punch through a cardboard cutout. Behind the cutout? People who had been wanting to invade Iraq forever and got their way. People who had wanted to cut taxes for the rich forever and got their way. People who had been waiting forever for lucrative Pentagon contracts and got their way. The list goes on and on. The story of Bush will be much more about the myriad ambitious thinkers, ideologues, charlatans, and capitalists who threw themselves gleefully into the president's orbit than it will be about the man himself.

"I'm gonna be dead, Matt, when they finally figure it out," Bush told Lauer, when asked if he was worried about his legacy. Indeed, Bush isn't the sort to sit up in bed at night wondering about things that will happen after he dies.

By Jesse Singal:
Reprinted with permission from The New Republic.