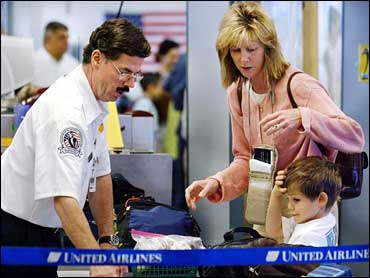 Fliers beware: This summer vacation season could rival 2000, the worst ever for flight delays, cancellations and cranky travelers crammed into airport terminals.

Takeoffs are now returning to pre-Sept. 11, 2001, levels, and millions of tickets have already been sold. Security-related delays are a concern, and so is one thing that no one controls: Mother Nature.

"In bad weather, that's when it shuts down," said Jack Evans, spokesman for the Air Transport Association, the industry group for major airlines.

Hot, humid air produces summer thunderstorms, typically in a zone that stretches from Texas to Michigan. They're too high to fly over, too dangerous to fly through and often too wide to fly around.

At hub airports - especially Chicago's O'Hare International - bad weather can combine with huge numbers of passengers to cause delays that cascade through the entire system. That's what happened in 2000, forcing thousands of passengers to sleep on terminal floors or sit fuming while their planes lingered on runways for hours.

Much has been done to improve things since then. Airports have added runways and terminals and improved efficiency, and the Federal Aviation Administration has adopted new strategies.

But the system has yet to be tested during a bad thunderstorm season, and the signs so far aren't encouraging.

Many were taking advantage of cheap ticket prices. The average airfare for a 1,000-mile flight is now $118, 20 percent lower than it was in 2000, according to Transportation Department Inspector General Kenneth Mead.

Bargain airfares allowed Nancy Cross, a physician's assistant from Ashburn, Va., to take her husband and two stepdaughters with her to Orlando, Fla., where she was attending a medical conference.

Cross couldn't believe the security line. "I can't even see where it begins," she said, standing on tiptoes.

At least the weather was good.

For the first 10 weeks of this year, slightly more flights were delayed, and delayed longer, than they were during the same period in 2000. Most delays were caused by weather.

To avoid massive weather disruptions throughout the whole system, the FAA has planned alternate routes based on where storms are likely to develop.

"If we have a certain weather pattern, we have a different way of getting them out," FAA chief Marion Blakey said.

The agency also has installed faster and more accurate weather prediction equipment, which allows air traffic controllers and the airlines to respond more quickly to changes in weather systems.

The FAA, though, can't control the volume of passengers or the number of people who work for the airlines.

Cash-strapped air carriers slashed their work forces in the past few years to save money. U.S. airlines cut 81,717 jobs between July 2000 and July 2004, and another 16,990 by February, leaving a total of 400,253 full-time equivalent workers, according to the Bureau of Transportation Statistics.

Understaffing was responsible for more than 500,000 US Airways passengers being delayed during the December holidays, according to a report issued by Mead. The report criticized the way US Airways Group Inc. handled the shortages of fleet service employees and flight attendants, particularly in Philadelphia.

Managers tried to mitigate the problem by paying overtime, but their "plans ultimately did not work," the report concluded.

US Airways spokeswoman Amy Kudwa said the airline is adding staff in key hubs - Washington, Philadelphia and Charlotte, N.C. - as part of a renewed focus on on-time performance. More than 500 employees have been added in Philadelphia alone, she said.

The airline is also working to get flights off the gate and in the air on time by doing things like closing the aircraft door five minutes before departure.

"May's been on time so far," Kudwa said last week.

American Airlines is among those that have made changes to avoid a repeat of 2000. "The ground rules have changed," spokeswoman Mary Frances Fagan said.

The airline has altered its schedules to eliminate rush-hour traffic jams at hub airports. Pilots now fly the same plane all day long, which means they don't lose time transferring from plane to plane.

The FAA also has ordered airlines to reduce their schedules at O'Hare - a hub for both American and United Airlines - during peak travel periods. The move has helped reduce congestion, said United spokesman Jeff Green.

Jason Trotman, who owns a marketing company in Brooklyn, N.Y., didn't think the airlines had enough staff as he waited in the long security line at Dulles, where he was taking off for a vacation in Spain. He pointed to closed airline ticket counters.

"It's ridiculous," Trotman said. "It's Memorial Day weekend, you know you're going to have crowds."